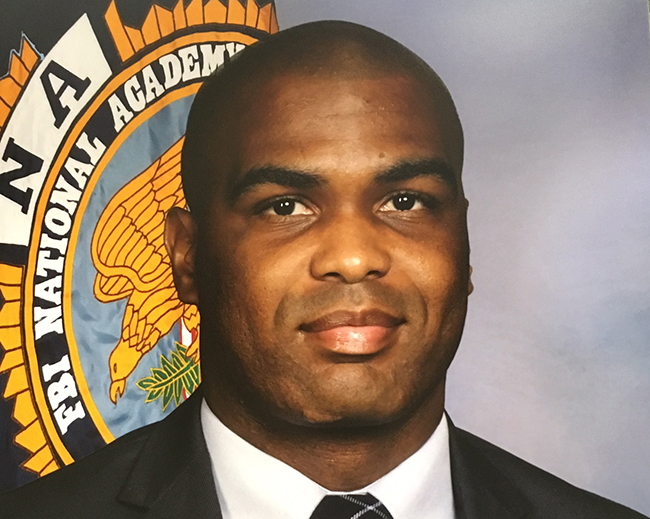 Detective Lt. Jeremy Cook was one of 224 law enforcement officers to graduate from the academy on Sept. 15 in Quantico, Virginia after a rigorous 10-week training program that focuses on advanced communication, leadership and fitness training.

“I had the honor and privilege of being selected,” Cook said. “Only 1 percent of all law enforcement across the world get to go to this academy so I feel blessed to get the opportunity. I went through a selection process and passed the background check and physical fitness test. This academy has been a goal of mine for awhile now so getting selected to go finally was great and beneficial for my career going forward.”

Cook has been with UPD for eight years; however, becoming a police officer wasn’t something he ever expected to happen.

In 2009, he was working at the Barksdale Boys and Girls Club of Oxford when a friend who worked at UPD suggested Cook apply to become a police officer.

“At that time I had never thought about being a police officer but applied not thinking I would get the job or even an interview,” Cook said. “A week later I was called to take a physical fitness test and sometime after that, I had an interview. I was offered the job and gladly accepted it. Looking back this was the best decision I have ever made in my life and I thank UPD for giving me a chance and believing in me.”

Cook, 34, has a degree from Ole Miss in exercise science and had no prior law enforcement experience when he applied at UPD.

“They saw something in me and they hired me,” he said.

Cook’s father, David Owens, was an officer for the Oxford Police Department in the 1990s.

The 269th session of the National Academy consisted of men and women from 48 states. Included in the class are members of law enforcement agencies from the District of Columbia, 22 international countries, five military organizations, and six federal civilian organizations.

Cook is an Oxford native, graduating from Lafayette High School in 2002.

He said his fellow classmates at the academy came from all over the world and they were housed in the same building as new FBI agents.

“I learned a lot from everyone I came in contact with,” he said. “There were discussions about race, politics, gender, and other issues that America is dealing with today. There were heated discussions and the conversations were uncomfortable for some people but were needed.”

Cook said he has no career goals of joining the FBI but plans on using the knowledge he gained at the academy to further his career at UPD and beyond.

“My goal is to eventually be an executive in our police department in the future and one day chief of police somewhere, if not at UPD,” he said. “To think of all the great officers who have come through UPD before me and who will come through after me, and to think my name will be linked with UPD and the FBI Academy forever, it’s an honor.”

Ole Miss students vote for the Landshark as new…