‘Nothing can break us’: Ole Miss vows to respond in face of 63-point loss 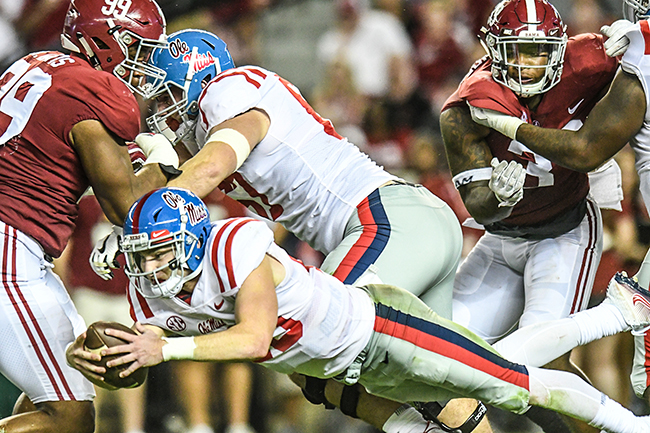 Ole Miss quarterback Shea Patterson (20) dives for yardage against Alabama in at Bryant-Denny Stadium in Tuscaloosa, Ala. on Saturday, September 30, 2017. (Bruce Newman, Oxford Eagle via AP)

Responding to a loss is one thing. Bouncing back from a nine-touchdown beatdown is another.

That’s what Ole Miss is working to do after leaving Bryant-Denny Stadium in the wee hours of Sunday morning with a 66-3 setback to No. 1 Alabama. It was the second-largest margin of defeat in the series for the Rebels with only a 64-0 loss in 1930 being worse.

Ole Miss (2-2, 0-1 Southeastern Conference) doesn’t have time to feel sorry for itself with a trip to No. 13 Auburn looming Saturday (11 a.m., SEC Network). The Rebels don’t have any choice but to move on.

“I think they’re all hurting right now — players, coaches, everybody,” interim coach Matt Luke said. “I think the only way to get that taste out of your mouth is to watch the film and go back to work (Sunday) and go try to find a way to beat Auburn.”

Being more competitive against Auburn (4-1, 2-0) or any of the other six SEC teams left on their schedule will require improvement from the Rebels in a lot of areas.

An offense that combined to score 92 points against South Alabama and Tennessee Martin has produced just a field goal in its last six quarters in losses to Cal and the Crimson Tide. The Rebels, who mustered a season-low 253 yards against Alabama, are last among FBS teams in rushing (74.3 yards per game) and are finding it more difficult to throw with defenses pinning their ears back. Ole Miss is 100th nationally in third-down conversion percentage after going 0-for-13 against the Crimson Tide and 119 in sacks allowed after Alabama brought Shea Patterson down five times behind the line of scrimmage.

Offensive coordinator Phil Longo said he’ll look at simplifying what the Rebels are running “just to give our kids an opportunity to go compete because we do have some character and we do have some talent,” though penalties and turnovers — Patterson has thrown all five of his interceptions in the last two games — haven’t helped. Effort in trying to get it fixed, Longo said, won’t be a problem.

“These kids responding is probably the thing I’m least worried about,” Longo said. “They’ve been through so much this spring and this fall. … The resolve in our locker room and the maturity in our locker room, that’s the least concerning issue for me right now.”

Defensively, stopping the run continues to be problematic for the Rebels, who fell to 116th nationally in run defense after surrendering 365 yards to Alabama. Tackling and fitting the proper gaps continue to be the biggest issues.

“There were definitely some misfits that need to be paid attention to and need to be cleaned up,” McGriff said. “When you’ve got gaps open, you’ve got to come downhill and fill them.”

McGriff said his unit’s improvement has to start with a stiff self-evaluation.

“Before we can start looking at Auburn, we have to pay attention to our mistakes and pay attention to us and then we’ll focus on the next opponent,” McGriff said. “I think it’s got to start with us.”

The Rebels will follow their trip to Auburn with a three-game homestand against Vanderbilt, LSU and Arkansas. With a 63-point loss to serve as motivation, Ole Miss is sticking together in its attempt to turn things around.

“I was talking to guys on the sideline, and we want to make sure we remember this one that way we won’t feel that way ever again,” Patterson said. “With all the stuff we’ve been through in the offseason, nothing can break us. I don’t care if we lost to Alabama by 60 points. We’re going to do everything we can to get ourselves better (Sunday) and throughout the week and try to come ready to play at Auburn.”