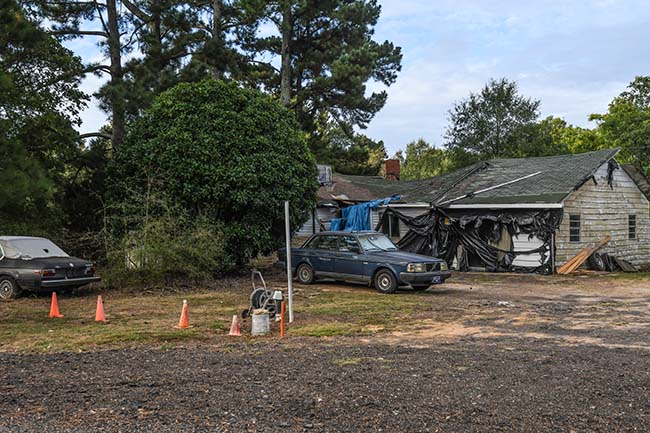 The Lafayette County Board of Supervisors on Monday held a hearing about properties located at 10, 12, and 12A Highway 334, located in Oxford, Miss. on Tuesday, October 3, 2017.

A month after one structure was condemned at 12 Highway 334, two other buildings were brought for consideration to the Board of Supervisors.

However, on Monday, Building Inspector Joel Hollowell told the board the two remaining structures, 10 and 12A Highway 334, didn’t “look nice” but did not meet the standards for condemnation.

The board condemned number 12 in September, finding the structure was unsafe and ordered the property owner to demolish the structure; however, no time frame was given to have that done during the board’s meeting last month.

The other two structures had no major structural damage, Hollowell said; however, there are still unsafe conditions existing on the property.

Hollowell said that a gully behind the structures is filled with debris and a large cistern is located on the property.

“There’s some tin over it to try to keep someone from falling in, but it’s still a danger,” he said.

There is also a pipe that allows gray water to be discharged onto the property that is against local build codes, Hollowell said.

Gray water is generally the water leaving the home that’s used in showers, bathtubs and sinks.

The board voted to give the landowner 45 days to make the necessary changes and clean up the remaining debris on the property.

Bill Houston resides in one of the structures and attended the meeting on Monday. He said he was trying to clean up the property and is in a legal battle with the landowner, his niece Anika Wilson, about whether he owns part of the property.

“I don’t care who owns it,” said Supervisor Kevin Frye. “I want it cleaned up.”

Wilson, who lives in Alabama, arrived at the meeting after the supervisors had voted.

Board president Jeff Busby told Wilson the supervisors could not evict people from her property and that she would have to take that up with the Justice Court.

“But it’s your property so while we didn’t condemn the other two structures, it’s certainly your right to demolish them,” he said.

The board also voted to give Wilson 45 days to demolish the structure that was condemned last month.

If the property owner doesn’t demolish the home or make the other required the changes, after 45 days, the county can go onto the property and the cost of demolition and cleanup would be assessed to the owner’s property taxes.

Joint meeting to focus on opioid abuse at Oxford…