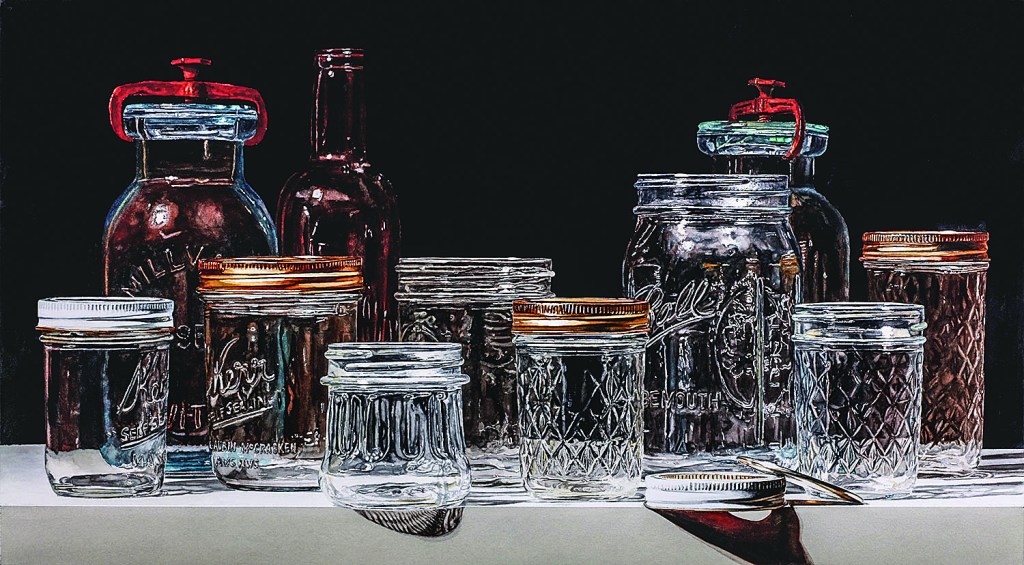 If you happened to have missed out on the eclectic mix of art that participants explored via the city’s double-decker buses during the monthly Oxford Art Crawl, don’t worry, we’ll catch you up!

If you’re bummed you were absent, also don’t fret – the Crawl, sponsored by the non-profit Yoknapatawpha Arts Council, runs every fourth Tuesday of the month.

And if you’re really keen, we listed the dates of the exhibitions and hours of the localities so you can go check them out on your own.

This month’s crawl toured eight localities around town and on the Ole Miss campus.

Wil Cook, who directs Southside Gallery and has been a part of the crawl for all seven years it has existed, said this month’s crawl has more stops than usual.

Since its inception, Cook said the Art Crawl has grown a lot and lately, the demographics of attendees seem to be shifting toward the younger generation.

“When it started it seemed to be more like a family event – I’d see a lot of people bring their children – but it’s slowly evolved to mainly students,” Cook said.

“I really liked how the various forms of art – poetry, painting and photography – reflect the diversity of the artists themselves,” Matt Travis, a freshman Chinese and International Studies major said. “The intersection of different mediums makes for a more coherent and representative body of work.”

Adams said he selected lesser-known artists whose work he thought would be integral in helping the Oxford community understand the experience of the queer in the south.

Some of Adams pieces also appear in the show, two of which he painted following the 2016 election.

In “Lady Liberty,” the Statue of Liberty is drowning in water that flows up to her forehead, covering her eyes. And American Sissy portrays an abstract male figure standing in front of the American flag with a star on his chest.

“After the election, if you were a minority you might’ve felt like the statue of liberty – drowning,” Adams said. “Or on the opposite end it’s also nice to empower yourself and be like ‘America is still ours – it can’t be taken away’.”

Misbits is a space for community members to not only view but also take classes on new media art. Art crawlers were able to see a current work in progress at Misbits located on University Avenue.

After 73-year-old Randy Hayes, graduated from Tupelo High School he jumped on a freighter heading across the Atlantic and hitchhiked throughout Europe for a year. Since then, Hayes has traveled throughout over 20 countries including Turkey, Japan and India.

Hayes’s artist method is unique: when he travels he takes a lot of photos which he saves and eventually paints on top of.

“Unwritten Memoir” is essentially Hayes’ life through a body paintings on top of photographs and other objects gathered from or inspired by his overseas travel and life in Mississippi.

One room of the exhibition dedicated entirely to Hayes’ Japanese-inspired works.

“America Selfie” is also deeply inspired by the 2016 election and modern democracy. Artist, Laura Elkins said that that following the election she couldn’t believe what types of sexist and misogynistic ideals were being encouraged.

The pink and orange toned art-installation, folded neatly into the wall, was inspired by Giambologna’s marble sculpture interpretation of “The Rape of the Sabine Woman,” Elkins said.

The work depicts cartoonish soldier-like figures assaulting a woman resembling the Statue of Freedom – the 154-year-old bronze female figure atop the Capitol equip with a military helmet, sheathed sword, shield and a wreath on her head.

“It’s a blatant expression of a lot of buzz topics in todays’ society,” accounting major, Drew Ramsey said. “And you can see the artists’ thoughts on the paper as a woman being oppressed.”

An array of photographs, paintings and sketches fill the back brick wall of the local café – giving coffee-lovers visuals to contemplate in between sips.

Martin Arnold, studio instructor at the University of North Alabama, and Laurin McCracken, President of the Watercolor USA Honor Society, take realism and figure painting to a whole new level with their intricately detailed water colors.

“I can’t believe it,” Kern said. “I thought they were photographs!”

Provision Oxford is a curated collection of specialty home furnishings, native and internationally sourced, ranging from classic to current styles.

Photos speak a thousand words and may be better at describing wide-ranging display of eccentric works. Plus, scrolling through these visuals is a great way to end your belated Art Crawl bus trip.