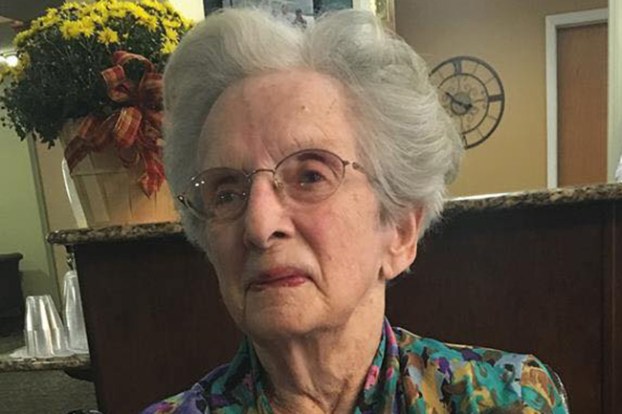 Lake Elliott on her 104th birthday.

Lake Elliott slept soundly during her afternoon nap Wednesday while her daughter Carolyn Carter sat close by, smiling as she glanced her mother.

“She still has that sweet spirit and smile that goes a long way around here — goes a long way everywhere,” Carter said. “That’s why I still want to be just like my mama.”

Elliott turned 105 years old on Sept. 30. A party was held for her at Brookdale Oxford Senior Living where she’s called home for the last nine years.

“She was 96 years old and living in a big home all by herself when we finally convinced her to give this place a chance,” Carter said. “And she’s loved it.”

While turning 105 is something to celebrate in itself, Elliott‘s birthday was publicly recognized by the Oxford Board of Aldermen who declared in a resolution that Sept. 30, 2017, would be known as “Lake McLarty Elliott Day,” in honor of Elliott‘s long life and her many years of community service.

Elliott was born in Lafayette County in what was then known as Dog Town, near Lafayette Springs. She attended small one-room schools as a small child, including the one where her mother, Ada McLarty was the teacher. She graduated from University High School in June 1932.

After briefly attending the University of Mississippi, Carter said her mother decided she didn’t like going to college and instead, went to work full-time at Tomlinson‘s Jewelry Store at 17 years old. It was there she met her husband, Richard Elliott, who came into the store to buy a baby gift for his niece. The couple married in 1941. In 1945, they purchased the jewelry store and renamed it to Elliott Jewelers.

They had two children, Carter and her older brother Bill who lives in Georgia.

In 1953, Richard became the mayor of Oxford and served one four-year term. He ran again in 1961 and served as mayor for another 16 years.

“Mama loved it,” Carter said of mother’s time as the first lady of Oxford. “She was very active in her role as the mayor’s wife. She would even speak at clubs when my father couldn’t make it.”

Elliott was also active in her church, First Baptist Church of Oxford, where she is now the oldest living member. She served on several committees over the years and often hosted visiting pastors in her home.

She served the community in the B&PW Club, Oxford Pilot Club and the Oxford Garden Club and was the founding member of the Woman’s Forum, which was started in 1948.

In 1982 she was chosen as Oxford‘s Citizen of the Year and in 1988, she was presented the Spirit of Service Award for Outstanding Community Service Volunteer by South Central Bell Telephone Company.

“She is the kind of person who could stick flowers in a vase and win a ribbon,” Carter said.

Carter was a shy girl as a child but would watch her mother who loved everyone and loved to socialize.

“When I went to college, I decided I was going to try to be more like her,” Carter said. “She was my role model all my life.”

Carter said her mother just laughs whenever someone mentions she‘s 105.

“It‘s like she can’t believe it,” Carter said. “But she has such a strong spirit and will to live.”

At 104, Elliott surprised everyone when she survived a total hip replacement surgery after falling and breaking her hip.

“The surgery was risky, but we didn’t want her to be in pain,” Carter said. “Most people at her age wouldn’t have survived that surgery, but she did.”

Carter and her husband, Greg attended the Board of Aldermen meeting last month where Elliott‘s great-nephew and Alderman John Morgan read the resolution proclaiming Sept. 30 as Lake Elliott Day.

“It meant so much to our family and us,” Carter said. “I think it meant a lot to the community as well.”

The Thacker Mountain Radio Hour features two authors this week, both of whom focus on “wild life.” Robert Olmstead will... read more