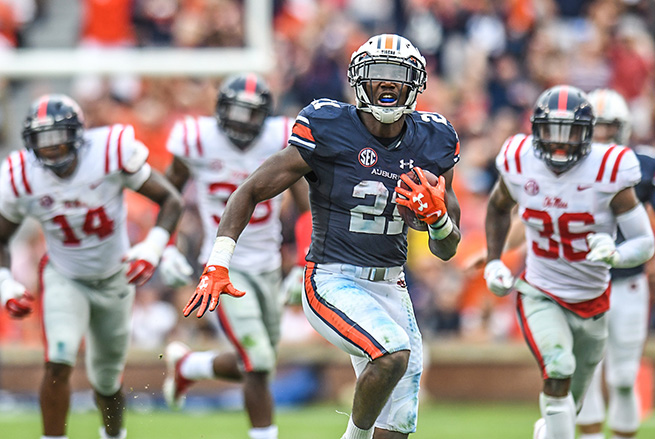 Auburn Tigers running back Kerryon Johnson (21) scores on a 48 yard run against Ole Miss at Jordan-Hare Stadium in Auburn, Ala. on Saturday, October 7, 2017. (Bruce Newman, Oxford Eagle via AP)

Ole Miss’ trip through the state of Alabama is over.

It ended with a 0-2 record after the Rebels fell to No. 13 Auburn 44-23 inside Jordan-Hare Stadium on Saturday afternoon.

Unlike last Saturday, Ole Miss (2-3, 0-2 Southeastern Conference) was able to find their offense late to put some points on the board. It was not enough as the Rebels managed to leave points on the field early in the contest.

After missing a 43-yard field goal try by Gary Wunderlich Ole Miss’ final six possessions of the first half resulted in four punts a turnover on downs and a made field goal of 27 yards by Wunderlich.

Auburn (5-1, 3-0) had a complete opposite start, scoring a touchdown on their first five possessions to grab the 35-3 lead at halftime.

Shea Patterson and the Rebel offense got going in the second half yet it was too little too late. Ole Miss scored touchdowns on three of their five drives in the second half. Wideout D.K. Metcalf caught two of them while running back Jordan Wilkins scored the third.

The Rebel defense struggled once again with a balanced offensive attack from Auburn. The Tigers piled up 563 total yards (235 passing, 326 rushing).