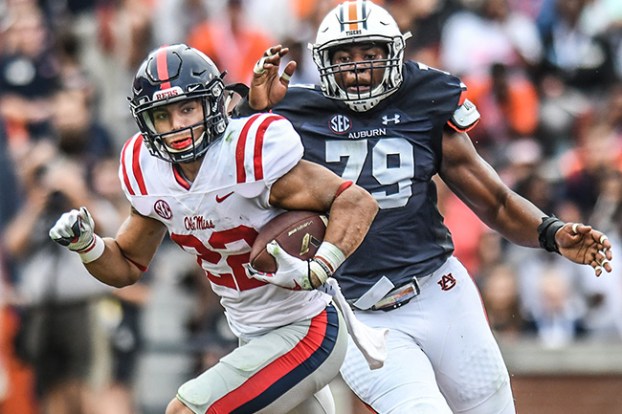 The Rebels have a long way to go.

Their first chance to rebound from a nine-touchdown loss to Alabama looked like more of the same against Auburn on Saturday at Jordan-Hare Stadium. Auburn scored on five of its first six possessions, Ole Miss’ suddenly dormant offense punted on five of its first seven, and the Rebels once again left Alabama licking its wounds in a 44-23 loss that Ole Miss made look closer than it was with a couple of late touchdowns against Auburn’s backups.

So the Rebels are heading back to Oxford with a losing record after a winless road trip and with its season on the brink with more than half of it left to play.

Not only has Ole Miss lost every game it’s played against a Power Five opponent, but the 11-point setback to Cal is the only one the Rebels have had a chance in. The Rebels trailed a combined 70-6 at the half against Alabama and Auburn and lost by a combined 84 points, the kind of lopsided scores that will take a toll on any team’s psyche.

Add the fact that Luke can’t dangle the possibility of a bowl game in front of his players, and finding another outlet of motivation becomes a chore. So much of that talk from Luke and his players was about playing for each other amid a turbulent offseason in the wake of the NCAA’s investigation and the abrupt resignation of Hugh Freeze, but those become tougher words to live by with frustration mounting.

If there’s any good news for Ole Miss, it’s that the Rebels didn’t lay down late when it would’ve been really easy to as they head into a more manageable part of their schedule with a three-game homestand starting this Saturday against Vanderbilt. LSU and Arkansas will also visit Vaught-Hemingway Stadium during that time, making for a trio of opponents that entered Saturday a combined 8-6 with no SEC wins.

Of course Ole Miss’ execution is going to have to be significantly better to have a real shot against those teams, which beat the Rebels by a combined 42 points last season, and anybody else in this league. Ole Miss began Saturday last among FBS teams in rushing while ranking near the bottom in several other categories and did nothing to improve on that, averaging just 2.8 yards on its 30 carries while Auburn’s Kerryon Johnson (204 yards, 3 TDs) had a career rushing day against Ole Miss’ still-struggling defense before the first half was over.

But the Rebels have to be more competitive before they can think about winning, and wanting to is half the battle. There’s still enough season left for Ole Miss to stabilize itself. There’s also the possibility things could spiral in a hurry.

Which is another way of saying Ole Miss’ mettle is about to be seriously tested.

TUSCALOOSA, Ala. — There were signs that what happened inside Bryant-Denny Stadium late Saturday night was coming. Despite talk from... read more