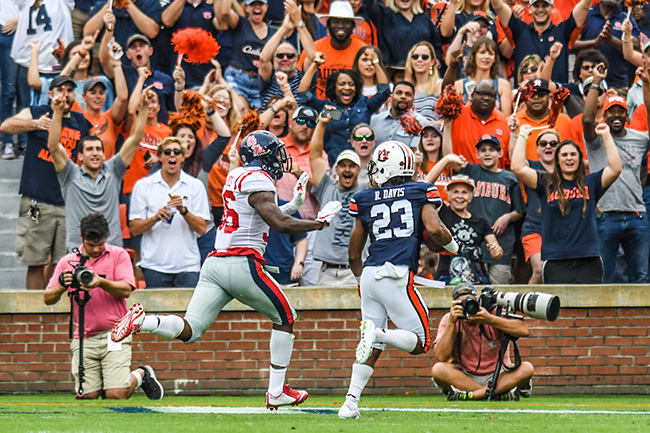 They didn’t make any difference.

The Rebels were submerged by another early onslaught en route to another lopsided loss, this one to Auburn at Jordan-Hare Stadium. A week after Ole Miss trailed 35-3 at the half on its way to a 63-point loss at Alabama, the Rebels trailed by the same score after two quarters against Auburn and didn’t get any closer than four scores until Jordan Wilkins capped the scoring with a 1-yard touchdown run with 2:57 left.

Ole Miss (2-3, 0-2 Southeastern Conference) trailed by as many as 35 points early in the third quarter, putting itself in another fateful hole against an SEC opponent.

“Really proud of my brothers the way we came out and fought in the second half, but we’ve got to start fast,” said receiver A.J. Brown, who caught a game-high 10 passes for 109 yards. “It’s the SEC. When you don’t start fast in the SEC, it’s kind of rough to get back.”

Auburn (5-1, 3-0) scored on each of its first five possessions, doing most of its damage against an Ole Miss defense that came in 116th nationally against the run. The Tigers ran for 326 yards and averaged 6.4 yards per carry with Kerryon Johnson going for a career-high 159 yards on 16 carries with three touchdowns — in the first half.

Johnson, who started for the injured Kamryn Pettway, finished with 204 yards with two of his scoring runs covering at least 17 yards. Auburn quarterback Jarrett Stidham only threw 11 passes but completed nine of them, including a screen to Ryan Davis that turned into a 75-yard touchdown late in the first quarter.

Misfits in the running game and missed tackles again plagued the Rebels, who allowed 391 of Auburn’s 561 yards in the first two quarters. Ole Miss held the Tigers to 170 yards and 4.7 yards a play in the second half, but it was too late.

“We’ve got to continue to improve our mental mistakes and be more spot on,” defensive coordinator Wesley McGriff said. “The mistakes that we’re making now are fatal. You’re not good enough in this league to spot a team 30 points in the first half.”

Ole Miss’ offense punted on four of its first seven possessions but moved the ball deep in Auburn territory on its first two drives only to have to settle for field goals both trips. Gary Wunderlich missed the first one and made the second before Auburn scored 31 unanswered points.

“We’ve got to know we’ve got to capitalize on those important situations and get the ball in the end zone,” quarterback Shea Patterson said.

Ole Miss did that in the third quarter on Patterson’s 8-yard touchdown pass to DK Metcalf, snapping a streak of more than 130 minutes of game time without a touchdown dating back to the first half against Cal. Patterson connected with Metcalf again for a 9-yard score in the fourth quarter before Wilkins’ touchdown run, but it’s not doing Ole Miss much good with early blunders helping teams put games well out of reach early.

“We have to not give up explosive plays. We can’t miss tackles,” interim coach Matt Luke said. “When we get in the red zone, we’ve got to find a way to score touchdowns and not settle for field goals. That’s where we’re at right now. That’s what we’ve got to do.”