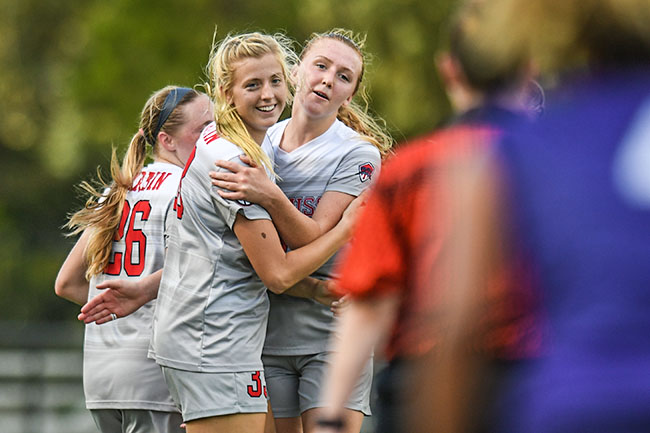 Ole Miss’ Molly Martin (33) is congratulated after scoring in the 45th minute against LSU at the Ole Miss Soccer Stadium in Oxford, Miss. on Sunday, October 8, 2017.

The Southeastern Conferences’ top offense came through once again and No. 24 Ole Miss moved back into contention for a first round bye in the SEC Tournament.

The Rebels defeated LSU 4-1 at the Ole Miss Soccer Complex on Sunday afternoon. It was a rebound win after the Rebels fell to No. 21 Tennessee 6-4 on Thursday.

After the offensive explosion on Thursday in Knoxville goals were expected to be tougher to come by as the Rebels went up against the fourth-best defense in the conference in LSU (8-3-1, 1-3-2). The Tigers allowed only nine goals through their first 12 games entering Sunday’s match.

“I was happy to get another four goals. I thought that was a big key to the game,” Ole Miss head coach Matt Mott said.

Ole Miss was the aggressor all match, out shooting LSU 17-5 — nine of those shots were on goal — but could not find the net for most of the first half. The Rebels had seven shots in the first half with three of them on goal. It took Martin scoring her third goal of the season with less than 90 seconds left in the half to put the Rebels out front.

Nine minutes into the second half Foster scored her 12th goal of the season to extend the Rebels’ lead. Kizer’s goals came in the 78 and 86th minutes for the winning margin.

Kizer now leads the team and the SEC with 13 goals. Both Kizer and Foster are ranked in the top-five nationally for goals scored.

“Obviously getting a goal it brings us a lot of energy,” Kizer said. “I think going into halftime I think we were like, ‘hey, we need to get another one.’ Not let (LSU) get into the game. Again, just keep connecting passes and not forcing was something we were focusing on.”

It was nearly a seventh shutout for Ole Miss goalkeeper Marnie Merrit but a goal by LSU’s Alex Thomas in the 67th minute put the Tigers on the board. Merritt’s six shutouts on the year puts her in a tie for third in the SEC.

Battle for the beach

Entering Sunday’s slate of games the Rebels were slotted eighth in the conference standings. The top six teams get a bye into the second round of the SEC Tournament later this month in Orange Beach, Alabama.

Two of Ole Miss’ remaining matches (at Texas A&M, vs. Auburn) are against teams slotted ahead of them in the standings.

“Those are huge games but right now we just want to get to the beach,” Mott said. “We want to qualify and then really work on the seeding. But it’s kind of a process to worry about every game. Right now it’s about A&M.”

Ole Miss gets their first crack at one of those teams on Friday when they travel to College Station, Texas to play the Aggies.