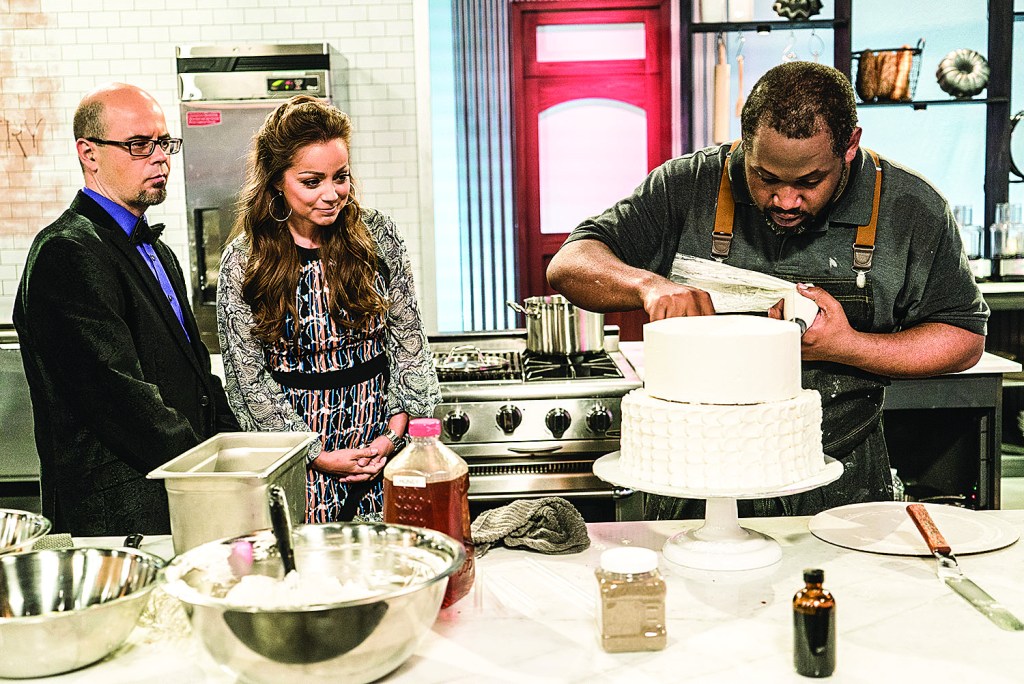 “OK, chefs, 30 more minutes left on the clock,”  says Adam Rapoport, the host of “Best Baker in America,” to a group of bakers representing the best-of-the-best in the USA.

Minutes tick by like seconds. Chefs, sweating from the heat of the ovens, make the final touches on their masterpieces before the panel of judges critique their work. One wrong move and the contestant’s chance of winning $25,000 goes up in flames like the top of a baked Alaska. No pressure, its just TV!

For Oxonian Dwayne Ingraham, it’s a piece of cake. This seasons hottest cooking show is Ingraham’s fourth time to be featured on a baking competition hosted by Food Network.

“One thing I love about it is that the only obstacle in my way is my own capability, Ingraham said. “If I can think it, I can do it in real life. “

Ingraham was raised in the small coastal town of Boothville, Louisiana and graduated high school in Hattiesburg. After attending the New England Culinary Institute in Vermont, he worked at the Ritz-Carlton in Sarasota, Florida and then in Michael Mina’s Seablue at the MGM Grand in Las Vegas.

After spending many years far from home, Ingraham found a job closer to home in Oxford working for the City Grocery Restaurant Group as a pastry chef.

“I wanted to get back to the South,” Ingraham, said. “There is nothing like a crawfish bowl or SEC football on weekends.”

While working for the CGRG in 2015, Ingram was contacted by a producer of the Food Network show “Cutthroat Kitchen” via Facebook about possibly becoming a contestant. Ingraham went on to win the competition and compete in the “Spring Baking Championship” that same year.

“That first time really gave me a buzz of excitement for cooking competitions,” Ingraham said. “I just so happened to be on the Food Networks website when I saw casting applications for ‘Spring Baking Championship’ so I applied and got lucky.”

Ingraham managed to go to the finals on that show, but did not win the grand prize. Then, in 2016, Ingraham was contacted again for “Cutthroat Kitchen” as one of the show’s past winners.

Around this time, Ingraham opened his own restaurant in Oxford, Sinfully Southern Bakery and Cafe that was located on Old Taylor Road. The bakery served Ingraham’s specialties such as buttermilk biscuits, cakes and other pastries. However, the business closed earlier this year.

“There was a lot that came with opening, managing and running a business,” Ingraham said. “I loved the creative side of the business, but I was spending more time looking at payrolls, marketing and ordering supplies. In the end, it took me away from what I like to do best.”

Ingraham now works as the director of food and beverages for the Graduate Hotel. But it wasn’t long before Food Network contacted him about competing in their new show “Best Baker in America.”

“I’m so thrilled that Dwayne has returned to compete on Food Network,” Simone Faure, co-owner and pastry chef at La Patisserie Choquette, said. “When we competed in ‘Spring Baking Championship’ it was the beginning of a great relationship. We were simply pushing ourselves to be our best.”

In the Oct. 4 episode, Ingraham’s interpretation of a deconstructed baked Alaska received praise from the judges.

“Dwayne is truly a great, deep-rooted, Southern boy,” Jason Smith, a judge on “Best Baker in America,” said.  “He really knows how to take a dish we all know and love and put an awesome modern spin on it.”

Ingraham encourages those who love to cook to become involved in contests. He credits the shows as a source of good work experience and as a great way to meet talented chefs that have helped his career.

“Best Baker in America” currently airs every Wednesday night at 9 p.m. on the Food Network. Two episodes have already aired, and the next episode will be on Oct. 11.

“I’m counting on him to bring it home this time,” Faure said. “With fingers crossed and breath held, I’ll be watching each week.”

Former Oxonian Rebecca Morgan finds herself back in Oxford…