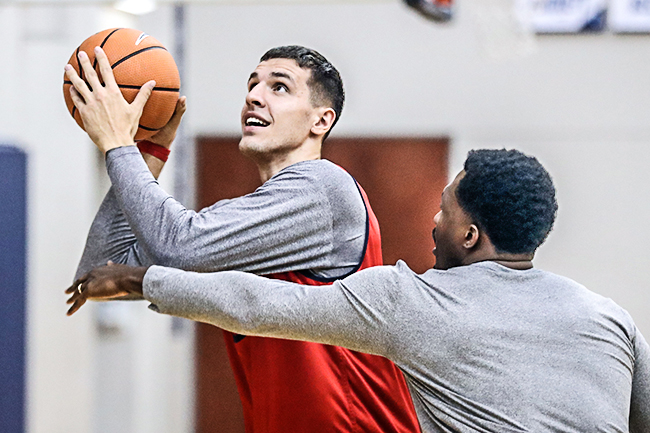 Ole Miss’ now-eligible big man began hearing about Saiz when Olejniczak transferred from Drake more than a year ago. Sitting out to fulfill NCAA transfer rules, he watched from a distance last season as Saiz recorded double-double after double-double in the Southeastern Conference.

But Olejniczak knows he can’t try to emulate the game of one of the best bigs in Ole Miss history.

“I’m just going to be myself,” Olejniczak said. “Nobody’s trying to replace Sebas.”

Maybe not, but Olejniczak will get the first crack at taking over the production Saiz left behind as a three-year starter down low. Saiz, the only player in the SEC to average a double-double last season, left with 32 career double-doubles, tied for fifth-most in school history, and is one of only two Ole Miss players ever to pull down more than 1,000 rebounds.

Olejniczak will go about it a different way.

The first true 7-footer Ole Miss coach Andy Kennedy has had during his 12-year tenure, Olejniczak will give the Rebels more of a defensive presence at the rim. He averaged more than a blocked shot per game during the 2015-16 season at Drake and pulled down 4.1 rebounds a night.

Olejniczak, a native of Poland, believes he can improve on those numbers after using his year away from the court to bulk up. He’s up to 255 pounds, a weight more suited to operate close to the basket against bigger, stronger athletes in the SEC.

But Olejniczak is still fairly new to the college game, and getting completely up to speed in a new league won’t start until the Rebels begin playing games beginning Nov. 10 against Louisiana. Olejniczak played in 20 games for Drake as a freshman, averaging 10.3 points and 4.6 rebounds over his final nine starts.

“For him, it’s just timing and experience,” Kennedy said. “He’s an incredible worker. … He’s got great enthusiasm. He wants to learn. He’s very, very coachable. I know he’s excited to have the opportunity to be on this stage, and he’s going to have a big impact for us this year.”

But the Rebels aren’t putting it all on Olejniczak to replace that production. Former junior college All-American Bruce Stevens is being counted on to provide instant offense as a stretch forward after averaging 16.2 points and shooting nearly 38 percent from 3-point range last season at Jones County Junior College.

Forward Karlis Silins, who nearly matches Olejniczak’s stature at 6-11 and 245 pounds, is healthy after a torn ACL ended his freshman season just seven games in. Marcanvis Hymon and Justas Furmanavicius return to add depth in the frontcourt after combining for 9.8 rebounds a game last season.

“We’ll have to do it by committee,” Kennedy said.

Olejniczak is working to do his part, including rounding out his offensive game. Doing that includes using pointers he picked up on while observing the physicality with which Saiz played in the post.

“He was able to move pretty much everybody he played against,” Olejniczak said. “When I came here, my base was narrow and it was easy to move me when I was going to my hook. It seems like nothing, but it’s really a big step for me. I feel it when I’m playing.”

Olejniczak is just ready to get started.

“It’s been a long time since I played a game, so I’m really looking forward to the first game,” Olejniczak said. “I cannot wait much any more.”

Ole Miss’ focus, not schemes, needs adjustment from the…