Harvest Supper supporting the arts at Rowan Oak in Oxford 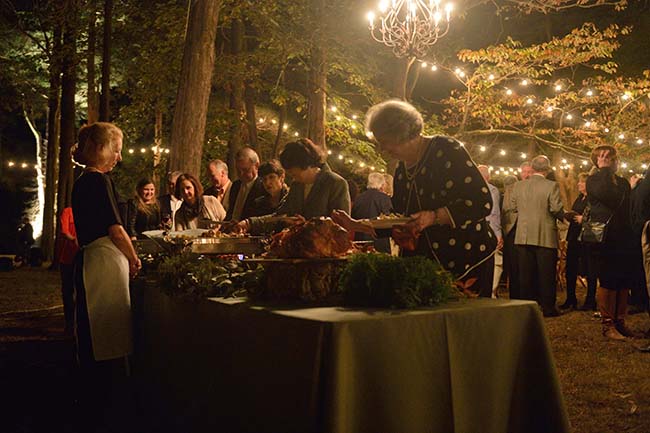 Editor’s Note: This story appears in the Oct. 2017 edition of Oxford Magazine.

Big ideas are nothing without a starting point and people willing to push a concept into reality.

That’s how the Harvest Supper, one of the largest philanthropic social and cultural events in Mississippi, has emerged as a signature fall night for Oxford, Lafayette County and Ole Miss.

It all began in 2012, the result of a last-minute brainstorm by several supporters from the community—the board of the Friends of the Museum—trying to find a new way to bring attention, energy and money into the oft-overlooked University of Mississippi Museum.

“We were challenged,” said Dorothy Howorth, who joined the Friends of the Museum support board in 2010. “The Museum’s Director had been lured to another job, so while the university searched for his replacement, we had an Interim Director who already had a full-time job. We had this wonderful museum and a lot of things we wanted to do.”

“The university funded the facilities, staff, and operating expenses, but the Museum had no ready funding for exhibits, events or special programs. It became painfully obvious that the Museum needed access to discretionary funds and that they couldn’t come from what the Museum needed to open its doors every day.”

The previous year, Howorth had attended a barbeque dinner that Wright Thompson hosted for his ESPN colleagues at Rowan Oak, which is managed by the University Museum. She thought a fall fundraising dinner on the grounds of the late William Faulkner’s home would be a natural.

There were a couple of hurdles. However—it was already August, they had no event concept, they had no seed money to host a fundraising party in less than two months, and they didn’t even have a name for the event. 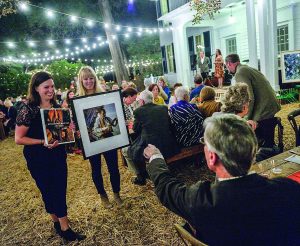 UM Museum staff members move through the crowd showing the art that is up for auction at the 2015 Harvest Supper at Rowan Oak. (Photo/Kevin Bain/Ole Miss Communications)

New Friends of the Museum board members, including Mary Ann Fruge, Ginny Terry, Lynn Wilkins, and the artist Carlyle Wolfe joined Howorth and board veterans such as Jason Bouldin and Ken Wooten with creative energy and determination to launch the first Harvest Supper to support the University Museum.

“Some of us knew how to do different things in having an event like this,” Howorth said, “but you don’t start planning in August for an event in September. Or you shouldn’t, anyway. We sat down at Ginny Terry’s (house) and said how do we want to do this.”

Wolfe says it was a “dreamy, creative conversation among people who were very invested” in doing something unique and uplifting for the Museum while showcasing the local arts and culture.

Given the fall date, they decided to emphasize the harvest season with a fresh farm-to-table menu, but how to focus the theme? Board member Blair Hobbs suggested they consult her husband, Oxford’s own national food culture authority, John T. Edge. “Easy,” he said. “Hire Elizabeth Heiskell and call it ‘Harvest Supper,’” Howorth recalls.

Once Ken Wooten and Margaret Wylde stepped forward with a major contribution and Ginny (Self) Terry secured a sponsorship from The Self Foundation, there was no turning back. The inaugural party was on, with dinner under the lights for more than 100 friends and supporters of the Museum on the east lawn of Faulkner’s Rowan Oak.

That first year was a close-knit effort: The Friends board met frequently and frenetically, but they say it was great fun. They called on friends and called in favors to sell tickets. Tom Howorth (Dorothy’s husband) tweaked sponsorship invitations and thank-you notes. Don Fruge (Mary Ann’s husband) made a crucial run to the liquor store for more wine when it ran out mid-party.

“Wright’s second ESPN party happened the night before our first event, so we used Wright’s lights for Harvest Supper,” Howorth says. “We didn’t have money for lights, and we didn’t light the trees along the driveway, so people couldn’t see very well. But it was a hit.”

Meanwhile, the university had hired its new museum director. Robert Saarnio arrived just in time to be introduced at the first Harvest Supper.

By the second year, Harvest Supper sponsorships doubled, and by the third year, tickets were sold out in the first week. Fundraising for the University Museum from Harvest Supper profits began at $17,000 in 2012, doubling each successive year to yield, now, more than $120,000 annually to support the Museum and its programming.

“The vision for bringing the culinary arts, music and visual arts together for this one event made perfect sense for the museum,” Wolfe says. “We had this feeling from the beginning, paired with good food and good wine.”

More than fundraising, the popular event brought together members of the Oxford and Lafayette County and Ole Miss alumni community who love and support the arts in a way like never before, quickly raising the profile of the University Museum. Funds raised from the Harvest Supper have gone toward the reinstallation of the Robinson Collection, supported educational programs, enhanced Rowan Oak, helped equip the installations shop, and funded exhibits like last year’s installation of the photography of William Eggleston.

“It has changed the culture of the museum,” Howorth says. “Departments can now act more entrepreneurially to achieve their core missions, knowing that the Friends might be able to fund their needs.”

The 6th annual Harvest Supper, scheduled this year for October 12, will be held once again on the historic grounds of Rowan Oak, an appropriate anchor to the Ole Miss Homecoming Week. The event is larger now, with silent and live art auctions that raise additional funds and celebrate regional art. Accommodating a crowd that has grown to 500 required a move from the east lawn to the west paddock.

“Our sponsorships have doubled this year,” says Joy Clark, a member of the Friends of the Museum board and co-chair of this year’s Harvest Supper. “We’re practically sold out of tickets a month out.  That type of support allows us to do so much for the Museum, which includes Rowan Oak.”

This year’s Harvest Supper auction includes 16 pieces of art. They are on display at the University Museum until October 12, the day of the event.  Artists with works on auction include Jonathan Kent Adams, Jason Bouldin, Langdon Clay, Maude Schuyler Clay, Bill Dunlap, Ke Francis, Robert Malone and Carlyle Wolfe.

“Our museum is a little jewel, and for it to have the acclaim it deserves we have needed to raise money and awareness,” Fruge said. “We have tried to listen to feedback every year so we can improve upon the event to make it special every year.”