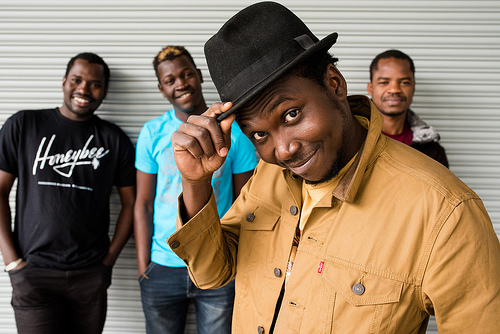 Songhoy Blues is a blues band from Timbuktu, Mali.

The show is hosted by Jim Dees and the Thacker house band, the Yalobushwhackers. The broadcast can be heard locally on WUMS 92.1 FM and online at http://myrebelradio.com/. The show is part of this year’s Sarahfest activities. Sarahfest is the Sarah Isom’s Center’s month-long celebration featuring readings, screenings, lectures, and concerts. For a full schedule of events, visit: http://sarahisomcenter.org/

Before writing fiction full-time, Charlie Jane Anders was the longtime editor of the popular science fiction and fantasy site, io9.com. Her most recent novel, All the Birds in the Sky (Tor Books) won the 2016 Nebula Award, given each year by the Science Fiction Writers of America. The novel tells the story of a complicated, decades-long relationship between a witch and a scientific genius, set against the backdrop of escalating climate change. The book was selected to many “Best Books of the Year” lists including Time, The Washington Post, NPR, Kirkus Review and Goodreads.

Adam Gussow is the author of “Beyond the Crossroads: The Devil and the Blues Tradition” (Univ. of North Carolina Press), Working from original transcriptions of more than 125 recordings released during the past ninety years, Gussow reveals the varied and fascinating ways the devil is evoked in blues music. Gussow is an associate professor of English and Southern Studies at the University of Mississippi and author of “Mister Satan’s Apprentice: A Blues Memoir.”

Songhoy Blues is a rocking blues band from Timbuktu, Mali. The group was formed after they fled to the city of Bamako in 2012 when armed jihadist militants took over their town and imposed Sharia law. Their debut CD, “Music in Exile,” came out in 2015. Their new album, “Résistance,” was released this June by Oxford’s Fat Possum Records. The album builds on the band’s musical vocabulary, incorporating elements of soul, R&B and hip-hop. The disc has been named one of Rolling Stone’s Top 50 Albums of 2017 So Far. Following their Thacker appearance, Songhoy Blues will play a full show at Proud Larry’s at 10 p.m.

The Thacker Mountain Radio Hour will celebrate 20 years on the air next Thursday, Oct. 19th at 6 p.m. at the Lyric Theatre. The show will feature Jimbo Mathus, Kenny Brown, Caroline Herring, country/soul singer Bonnie Bishop and long-haul trucker/author Finn Murphy. An after-party will follow at Off Square Books. More information at http://thackermountain.com/.