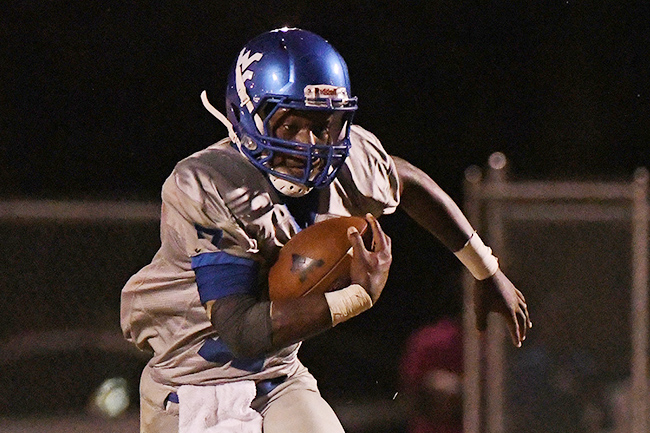 There might be something special brewing in Yalobusha County.

A season removed from a 2-9 season, the Water Valley Blue Devils are rolling.

They have already won three more games than in 2016 and are currently undefeated in Region 2-3A.

With Coahoma AHS visiting on Friday (7 p.m., 105.5 FM) the Blue Devils have a good chance to keep that zero in the loss column.

Winners of two straight, Water Valley (5-3, 2-0 2-3A) is riding a hot streak that included a 51-26 win on the road at Marks against M.S. Palmer last Friday. The first eight weeks of the season has revealed a young team that is having to mature much faster than most teams should. The results are speaking for themselves.

“We’ve gone through a couple years of throwing kids in the fire before they should’ve been,” Water Valley head coach Brad Embry said. “I was always worried I was going to get arrested for child abuse for putting so many babies out there. Now, we’ve gone to a point to where we’re like, ‘hey these guys have learned a lot.’ Hopefully we continue to learn those things and continue to get better.”

The play of Water Valley’s explosive offense has been well documented but what has flown under the radar most of the season is the play of their defense. The Blue Devils are holding opponents to 17.7 points per game, including two shutouts. Only two teams have score more than 26 points on Water Valley and they were back-to-back losses to Calhoun City and Winona earlier this season.

“We’re executing a lot better,” Embry said. “We’re in the right gap most of the time. That’s hard for any team to be gap sound. We’re not letting receivers run free. They’re catching balls contested.  We’re getting better and better as far as our bodies maturing. They’ve got a lot of experience now. I’m not worried about their age or grade.”

New to Region 2-3A, Coahoma AHS has not had a stellar first season. The Tigers are 0-2 in the region and 1-7 overall. It could be another good night for the Blue Devil offense with Coahoma’s defense giving up nearly 25 points a game. They fell to undefeated North Panola 52-12 last Saturday.