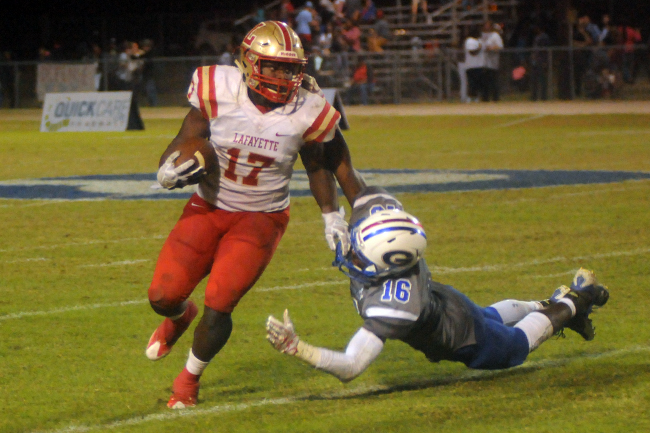 The Commodores had their two-game win streak snapped by Grenada with a 14-12 loss at Grenada High School.

A late rally by Lafayette (2-6, 2-2 Region 1-5A) scoring with less than a minute left came up short when the two-point conversion failed. Quarterback Randy Anderson’s pass to Dallas Boggs fell incomplete in the end zone.

Grenada (4-5, 3-1) recovered the Commodores onside kick to ice the game with 34 seconds left.

It is the second year in a row Lafayette played Grenada close. The Commodores lost 14-7 last season before beginning their 13-game winning streak towards a state championship.

“It’s the same thing we did last year,” Lafayette head coach Michael Fair said. “I think it was 0-0 heading into the fourth quarter. We match up like this with Grenada and I don’t really know why. It’s just kind of who we are and kind of who they are. They just got the best of us tonight.”

Lafayette got on the board first with a 34-yard field goal by Robbie Langley. The Commodores opening drive lasted over 7 minutes and was thwarted by there penalties for 40 yards. Langley added another field goal — this one for 24 yards — to put Lafayette down 7-6 at halftime.

Grenada’s lead at intermission was due to a nine-yard touchdown pass by quarterback Jared Barnes to Christian Wortham with three minutes left in the half.

The Chargers lead grew to eight points when Barnes hit tight end Will Baker for another nine-yard touchdown pass. It capped Grenada’s opening drive of the second half that went 80 yards.

Lafayette stayed in the game when Grenada missed a 29-yard field goal that would have made it a two score game with six minutes left. The Commodores took full advantage of the gift when Anderson threw a three yard touchdown pass to running back Jamie Shaw on fourth and goal, leading to the failed two-point play.

“If it wasn’t for penalties and some things in the first half, we felt like we were on to something,” Fair said. “Then we came out in the second half and liked what we were doing even though we didn’t score til late in the game. The kids never gave up. That was key. They had a lot of opportunities to kind of lay down but they never did.”

With three games left Lafayette’s playoff chances hang in the balance. The Commodores — who are currently tied with Lake Cormorant for the fourth seed — return home on Friday to host Center Hill (1-7, 1-3).