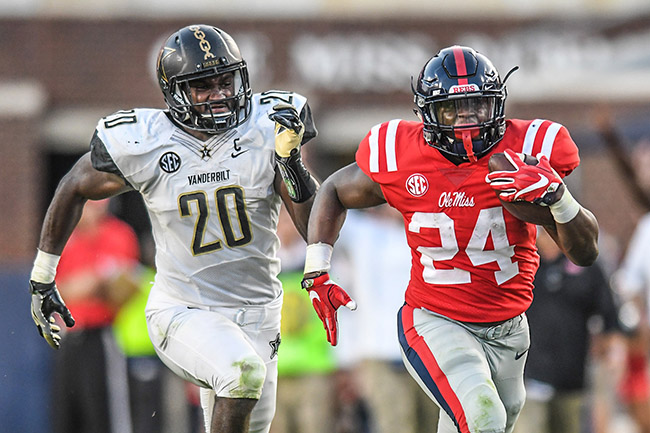 I used this space last week to write about Ole Miss’ mettle would be tested.

How could it not be?

The Rebels’ return home for the first time in a month Saturday against Vanderbilt was going to bring with it two possible schools of thought for players, coaches and fans: Hope that Ole Miss could start turning things around or fear that the season is approaching the point of no return.

There’s still a ways to go, but there’s some hope after Ole Miss passed its test with a 57-35 win inside Vaught-Hemingway Stadium.

Vanderbilt isn’t Alabama or Auburn. Not even close. But the Commodores have given Ole Miss fits over the years with six wins in the teams’ previous 10 meetings, including a 38-17 beatdown of the Rebels last season in Nashville.

The score was similarly lopsided Saturday but in the opposite direction in large part because the Rebels answered the call with perhaps their most complete game of the season.

Vanderbilt looked just as game as it usually does against Ole Miss early, punching with two straight touchdown drives at the end of the first quarter and the start of the second to take a 14-7 lead. It would’ve been the ideal time for a fragile team to let things unravel.

Instead, for the first time in a long time, Ole Miss punched back.

The Rebels, who produced their most points in the series since dropping 63 on the Commodores in 1979, got in the end zone on each of their next four possessions with a pair of touchdown passes from Shea Patterson, a run by Patterson and an 18-yard scamper from Jordan Wilkins. Patterson finished with four touchdown passes as the Rebels’ air attack did what it usually does, but it finally got some help from a ground game that’s usually dormant.

Ole Miss ran for 252 yards, Wilkins accounted for 113 of those, and the Rebels averaged 6.1 yards a carry. Going against a Vanderbilt defense that ranked 121st nationally against the run certainly helped, but Ole Miss came into the day averaging just 76 rushing yards a game. Ole Miss had 107 at halftime on the way to the most rushing yards it’s produced in an SEC game since going for 359 against Tennessee in 2009.

Ole Miss’ defense continued to give up its usual big numbers on the ground with Vanderbilt piling up 188 rushing yards, but the Rebels were able to neutralize the rest of the Commodores’ offense by generating the kind of pressure that’s rarely been seen out of them. Ole Miss constantly hounded quarterback Kyle Shurmur, who completed just 13 of his 29 passes for 177 yards, with seven sacks — its most since the Egg Bowl in 2015 — and five hurries.

Ole Miss only had three sacks before Saturday but had five by halftime. The Rebels also came in light on turnovers having forced just three all season but got two from Vanderbilt and nearly had a third when Marquis Haynes’ strip-sack of Shurmur early in the third quarter resulted in a safety that swung momentum in the Rebels’ favor for good.

It all resulted in a win, something Ole Miss desperately needed regardless of who it came against or what it looked like as the Rebels try to reverse the course of their season.

Ed Orgeron will make his return to Oxford next week with an LSU team that erased a three-touchdown deficit against Auburn for a 27-23 win Saturday but has also lost to Troy. Arkansas, which began Saturday night winless in the SEC, will visit Vaught-Hemingway Stadium the week after that before the Rebels head to Kentucky to start November.

No other game left on Ole Miss’ schedule will turn into a win without a fight, but the Rebels showed rather convincingly Saturday they’ve still got plenty of it left.