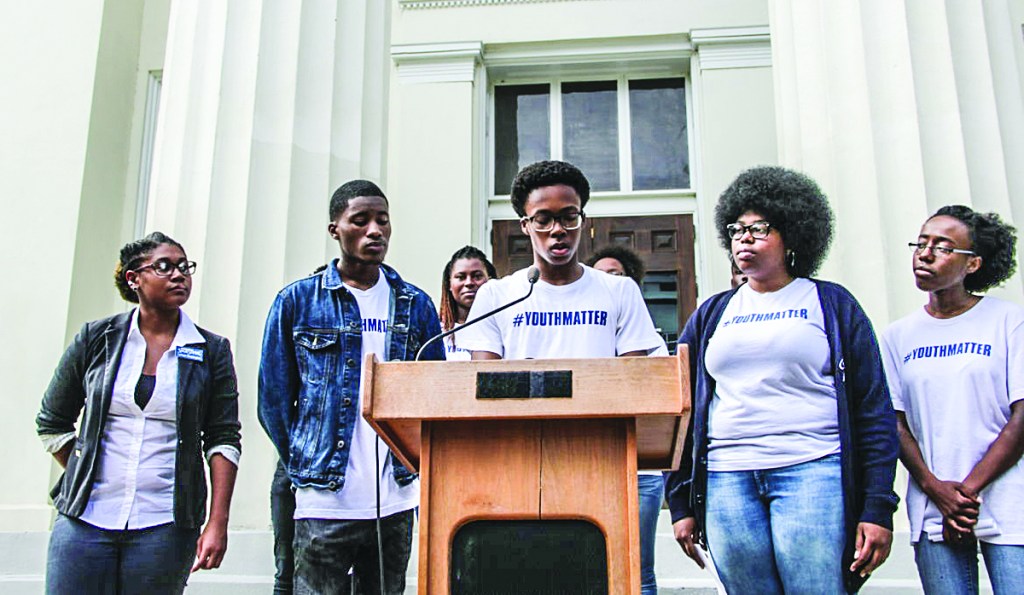 With the threat of a district takeover still looming, some Jackson Public School’s students want a seat at the negotiating table with Gov. Phil Bryant and other officials.

“Everybody is saying it’s for the betterment of the students, yet no one has sat down and asked us what our opinion (is) on this,” said Zion Blount, 17.

The students — like their parents, teachers and others — are waiting on the governor’s decision. Bryant said last month he would wait until the Oct. 19 State Board of Education meeting to decide whether to declare a state of emergency in the district and initiate a state takeover. Both the State Board and Commission on School Accreditation last month declared that an extreme emergency situation exists in the district that jeopardizes the safety, security, and educational interests of the students.

A handful of students gathered outside of Jackson City Hall Monday afternoon to denounce a takeover and share their thoughts on the state of their district and what is necessary to improve it. The press conference was hosted by “The Ambassadors,” a leadership training and civic engagement program comprised of students from each of the district’s seven high schools.

During the press event, the students said the educational system needs to provide high-quality educational experiences and opportunities for students to learn, as well as support and for students to develop their own voices and chances for civic engagement. Additionally, the system should promote the idea that young people are essential to the community and have the ability to make a positive impact, they said. These requests are only possible if the district, state Department of Education, local leaders, students and community collaborate, the group said.

In a statement, the students warned that a district takeover could wreak havoc on student attendance and graduation rates.

“The loss of our voice will result in apathetic behaviors towards school,” the statement said. “It is also necessary for students to generally voice our concerns, opinions, and ideas due to the fact that it’s impacting ‘OUR’ future.”

Some of the ambassadors at the event were newly elected student ambassadors, the first representatives to serve after the Board of Trustees voted to approve the policy in May as a way to provide students with a voice and active role in policy-making. One student from each district high school was elected by his or her peers to serve as a student representative during the 2017-18 school year.

Zion, a senior at Murrah High School, said she read the 680-page report and attended the commission meeting on Sept. 13. The commission’s decision to declare a state of extreme emergency was heartbreaking, she said. She said she understood the district has problems, but the board and commission failed to note the improvements made.

“It didn’t really reflect what it was like going to JPS,” Zion said. “I feel like JPS can no longer continue going on the way it is now, but I also feel like with MDE’s help we can actually go towards having a better school for tomorrow, for the next generations.”

Student representative and Callaway High School Senior Dante Moore described a state takeover as a “dictatorship” in which students would have no say. If the district is taken over, it could destroy the morale of students already struggling with school and may drive some to give up entirely, he said.

“And I don’t think that as a district we want that for any of our kids or our students,” said Moore, 17. “I feel like this takeover, ultimately, it will clear out the school houses and fill up the jail houses.”

My morning with the director of Alcohol, Tobacco and…