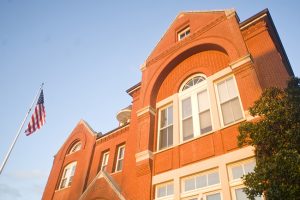 While the Oxford Board of Aldermen gave a nod to the preliminary drawings last month for the city’s first downtown parking garage, Mayor Robyn Tannehill and a few of the aldermen weren’t completely happy with the aesthetics of the garage and said it appeared too “boxy.”

Casey Rogers, with Innovative Construction Management who is acting as construction manager, was directed to go back to the drawing boards to tweak the design to make it more pleasing to the eye.

Alderman Ulysses Howell said he was glad to see the new design is modeled after City Hall.

Other windows were also made larger than in the original design.

The board unanimously approved the new design. Aldermen John Morgan and Mayor Robyn Tannehill were out of town and not present at the meeting.

The garage will be built behind the Oxford-University Club and will have 410 parking spaces with about 81 surface spots remaining in the current parking lot, giving the downtown area a total of about 500 parking spaces. It will sit about 40 feet from the corner of Jefferson Avenue and have three points of ingress and egress.

After the final drafts and site plan is complete, the plans will go before the Courthouse Square Historic Preservation Commission in the coming weeks to gain a Certificate of Appropriateness.