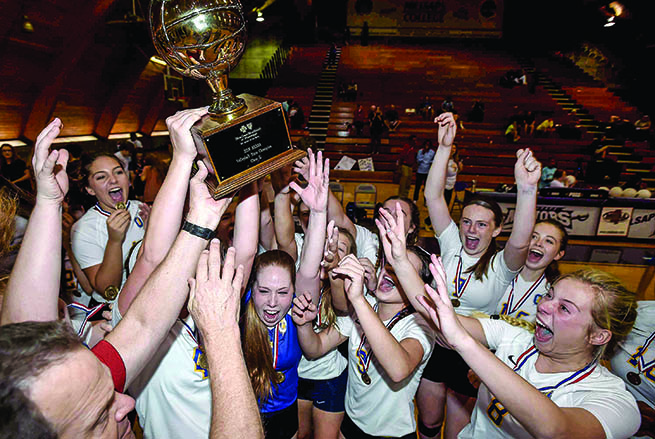 The Oxford Lady Chargers celebrate with the Class II trophy after beating Lewisburg on Saturday, October 29, 2016, in the MHSAA State Volleyball Championship at Millsaps College in Jackson, Miss.

The journey to Starkville has begun.

The MHSAA state volleyball playoffs begin on Thursday and all three area schools have their fair shake at making it to Mississippi State next weekend.

For one school it is about making history in a bid for a second straight state championship while it is an opportunity for two others to play for their first.

Oxford clinched their first state title in 18 years with the Class II championship last season. The Chargers have given themselves another chance in their first year in Class III.

With a comeback win against Tupelo last month the Chargers (20-9) clinched the Region 2-Class III title as well as the No. 1 seed.

“I feel pretty good right now,” Oxford head coach Kacie Hengler said of her team entering the postseason. “I feel like we’re really healthy which is not always common at this point of the season. I feel like it’s the first time we’ve got our whole team together and in good shape. I do think we’ve got a lot of work to do.”

The Chargers host Northwest Rankin —the No. 2 seed in Region 3 — for their first round match. It is the second time this season the two teams will meet.

“We played really well when we played (Northwest Rankin),” Hengler said. “We beat them in two (sets) but I think we have to come out pretty strong. We can’t come out slow.”

For the first time since Sept. 12 Oxford will play in their own gym. The basketball court in Oxford High gym has been under repairs for the past month but the Chargers were able to get back in on Tuesday.

Lafayette
Much like their crosstown rivals, the Commodores are also hosting their first round match against Corinth.

The Commodores split their season series with Region 4 foe Caledonia and with a win over Amory last week clinched the region title.

It has been a roller coaster season for the Commodores (10-10) and they hope they are on the rise for four more matches.

“This team’s really come together” Lafayette head coach Clint Jordan said. “We’ve had some lows. We’ve honestly gone out and not played as well a few times and really put ourselves in some bad situations. But when we’ve needed it we’ve played well.”

The Commodores defeated Corinth 2-0 to start the season in the Pontotoc Classic on Aug. 5 but then the Warriors (15-9) defeated them 3-0 in their gym on Sept. 7.

“We’re pretty even,” Jordan said. “Neither one of use should’ve won in straight sets but we both did. If we’ll play hard and we’ll play the right way we have a real opportunity in front of us.”

Water Valley
Water Valley finished second in Region 3 and will start the Class I playoffs on the road at Belmont.

The Blue Devils (11-4) finished behind Region 3 winning Choctaw County, the only team to defeat them in region play.