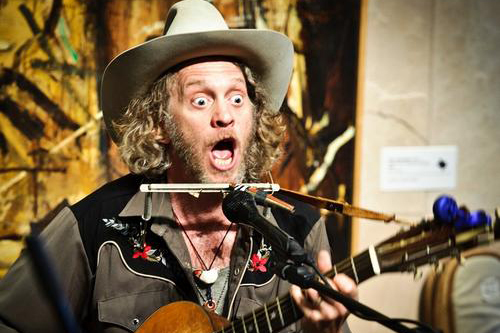 The show is hosted by Jim Dees and house band, The Yalobushwhackers. There will be a special appearance by the show’s original house band, the Sincere Ramblers: Caroline Herring, Bryan Ledford, Wendell Haag and David Woolworth.

The program will be broadcast on WUMS 92.1 FM and online: http://myrebelradio.com

An after-party will follow at Off Square Books (129 Courthouse Square) beginning at 7:30 p.m. The party will feature cocktails and appetizers by The Main Event and is free to current Thacker members. New members may join at the door.

Thacker host Jim Dees says the 20th anniversary is due to the perseverance of the show’s crew and supporters. “Richard Howorth and Square Books kept us going through the early, lean years. We’ve had board members and producers who have come in with fresh enthusiasm at just the right time. We’ve had turn over in our house band over the years but never any drop-off. Our audience is loyal and generous. It’s a perfect storm.”

In his memoir of driving a truck for three decades, The Long Haul – A Trucker’s Tales of Life on the Road (Norton), Finn Murphy offers a trucker’s-eye view of America on the move. He whisks readers down the I-95 Powerlane, across the Florida Everglades, in and out of the truck stops of the Midwest, and through the steep grades of the Rocky Mountains. Murphy recounts with wit, candor, and charm the America he has seen change over the decades.

Kenny Brown played with the late bluesman R.L. Burnside for nearly 30 years. In recent years, Brown has forged his own successful career, taking the north Mississippi hill country blues sound all over the world. His CDs include the double disc, Can’t Stay Too Long (Devil Down Records), Stingray and Meet Ya in the Bottom. Each June, Brown plays host to two dozen blues acts at the annual North Mississippi Hill Country Picnic.

Jimbo Mathus has been on the road this year, delighting national audiences as the front man for the Squirrel Nut Zippers. As a sideman, Mathus has worked with Elvis Costello and Buddy Guy, among others. His albums include Band of Storms (Big Legal Mess) Blue Healer, Dark Night of the Soul and Confederate Buddha. Mathus will perform with the Mosquitoville Players.

Country/soul singer Bonnie Bishop’s latest CD is, Ain’t Who I Was (Thirty Tigers) produced by Dave Cobb (Chris Stapleton, Sturgill Simpson, Jason Isbell). Bishop credits her early years in Mississippi for her vocal chops. “I am from Texas, but there’s a lot of Mississippi in me,” she says. “I definitely got my soul from hanging with all the black girls in the choir there. That’s how I learned to sing.”

The Thacker Mountain Radio Hour began in 1997 at Blind Jim’s (now The Summit) as the “Words and Music” show. It went statewide on Mississippi Public Broadcasting in 2001. The program received the Governor’s Award for Broadcast Excellence in 2005 and a “Certificate of Merit” from the Mississippi Institute of Arts and Letters this year.

The Pantry seeks to extend lease with Oxford