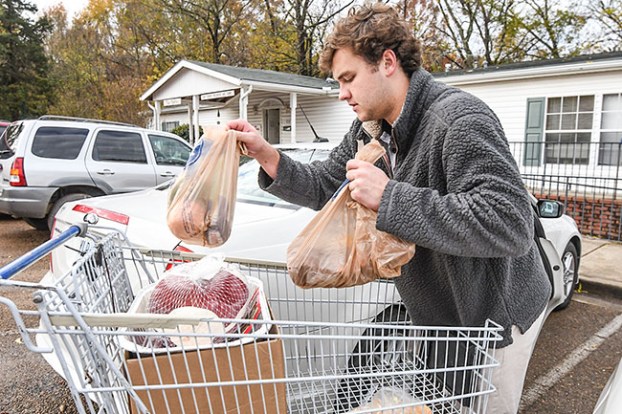 The Pantry seeks to extend lease with Oxford

The Pantry helps thousands of Oxford and Laffette County citizens each year since 1982 by providing food to low-income families and elderly living on a fixed income.

For more than 18 years, The Pantry has been serving those residents out of a building on land it leases from the city of Oxford.

In 2001, the city donated the lease of land next to the Oxford Police Department for 20 years. An Oxford business donated a double-wide trailer that is need of repairs, according to The Pantry Vice President Guthrie President Abbott.

Abbott told the Oxford Board of Aldermen Tuesday that while the 20-year lease isn’t up until August 2021, The Pantry would like the board to extend the lease for another 10 years now so The Pantry Board of Directors can start making plans to repair the double-wide trailer and expand the storage end of the building in order to strengthen the flooring to support the weight of commercial freezers and to build a new loading dock.

“The Pantry is a vital part of this community,” Abbott said.

However, Public Works Director Bart Robinson said the city is about to form a committee to look at all city properties and their uses.

Robinson told the aldermen his suggestion is to wait to extend the lease for The Pantry until after the committee is formed and given time to evaluate the city’s growing pains.

The aldermen agreed and no action was taken on The Pantry’s request to extend the lease.

“I think we all recognize the value of The Pantry to this community,” Alderman Janice Antonow told Abbott. “You won’t fall through the cracks.”

According to a letter to the board by The Pantry, dated Oct. 9, signed by Abbott and Pantry President Ann O’Dell, The Pantry has served 122,022 weeks’ supply of groceries to individuals who meet the USDA poverty eligibility guidelines and refers clients to other local organizations who can provide additional assistance.

“The location is ideal for clients and we have a valuable parking lot and a building that could not be moved,” the letter reads. “Any attempt to move The Pantry operation would require huge expenditures and The Pantry has no such funds.”

While the Oxford Board of Aldermen gave a nod to the preliminary drawings last month for the city’s first... read more