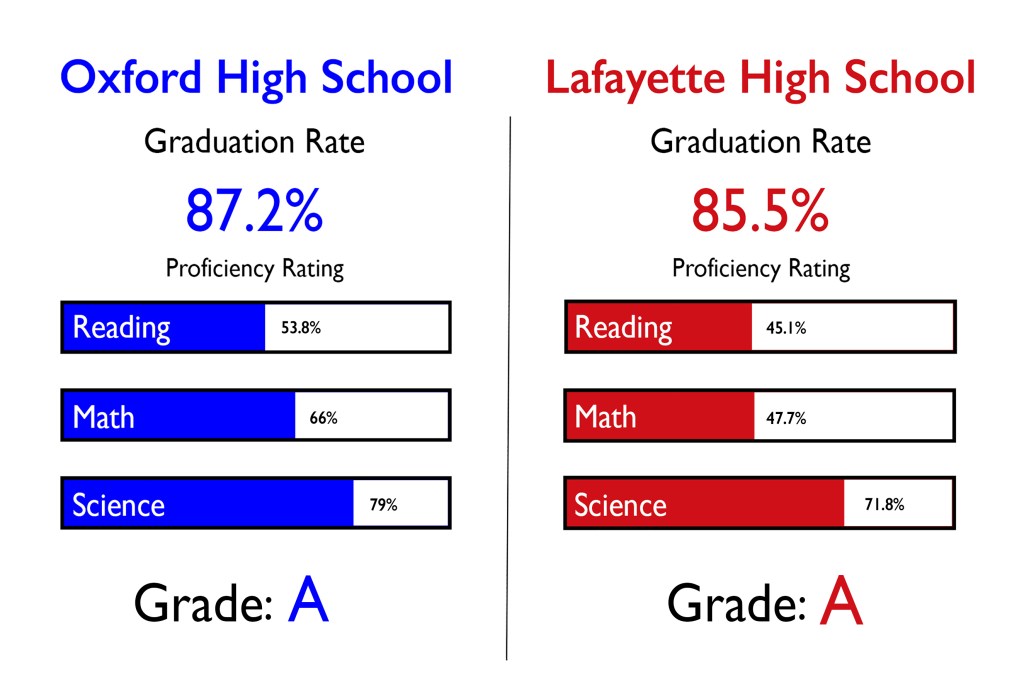 The Oxford School District is one of 15 in the state to receive an A rating from the Mississippi Department of Education, according to the 2016-2017 Accountability Results that were released today.

Last year, OSD scored 745 points and had the highest school district accreditation rating in the state. Schools receive points for performance and growth on statewide assessments and for their graduation rate. Mississippi’s school grading system is designed to inform parents and communities how well their schools and districts are educating students.

The A-F grading system is a way to identify how well students are performing in school, especially on tests and assignments. For school or district grades, several factors are taken into consideration.

Grades are assigned to schools based on points earned. Schools earn points in several categories, such as performance, growth and graduation rate.

For the district, students scored 53.8 on reading proficiency and 66 in math with an 87.2 graduation rate; however, OSD Superintendent Brian Harvey said 13 students graduated early last year and weren’t counted in state’s numbers.

“That puts us at a more than 90 percent graduation rate,” Harvey said this morning.

Oxford High School, ninth through 12th grades, scored 814 points, with 71.7 in reading and 67.8 in math and was the 14th highest scoring high school in the state.

“We are certainly excited about being an A district,” Harvey said. “That proves that the hard work of our teachers, administrators and students has paid off. We’re also excited to be tied for the top two ranking district. Everyone wants to be No. 1. Once you’ve been No. 1, you want to stay there, but we’re excited about where we are.”

Lafayette County schools also scored well, with a B rating, earning 659 points overall. However, Lafayette High School earned an A grade, with 795 total points, and a 53.1 in reading proficiency and a 62.6 in math proficiency. Lafayette’s overall graduation rate is 85.6 percent. All other schools in the district earned a B.

Lafayette County School District Superintendent Adam Pugh said he is proud that the overall scoring for the county is increasing.