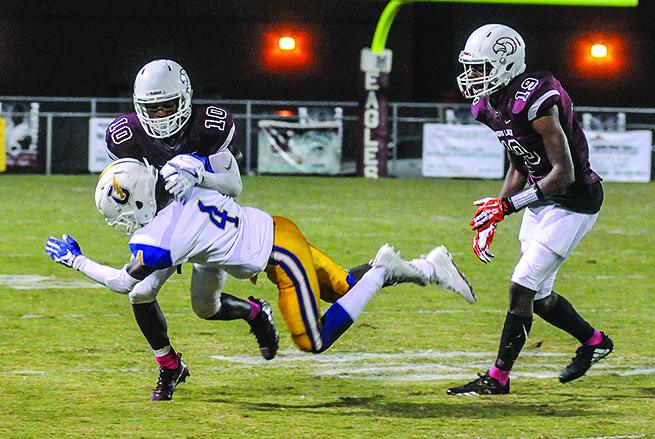 Oxford got back to .500 in Region 1-6A with a win over then No. 10, and undefeated, Horn Lake. Unfortunately for the Chargers it did not move them into a playoff spot.

If they want to keep playing past Nov.3 they must keep winning.

After traveling to north Mississippi last week the Chargers (6-3, 2-2 Region 1-6A) head to the most southern point of their region map with a game at Columbus on Friday (7 p.m., 95.5 FM).

A win over Horn Lake last week gives them the tiebreaker edge in head-to-head but losses to Southaven and South Panola puts Oxford in a tight spot. The Chargers play at No. 3 Tupelo in the regular season finale on Nov. 3.

“Ultimately all that did was make this week that much bigger,” Oxford head coach Chris Cutcliffe said. “We started out 0-2 in the region and we’re really fighting to make the playoffs. How we’ve looked at it is we’ve got to win these one game at a time so the next one is even bigger. It’s just got to continue to build.”

With Columbus (2-6, 1-3) and Hernando (1-3) coming up on the schedule there is potential for the Chargers to string some wins together before playing the Golden Wave.

The Falcons are riding a three-game losing streak since defeating DeSoto Central in their region opener on Sept. 22. The three losses have come from Tupelo, Horn Lake and Southaven, the top three teams in the region.

“They’ve probably played the toughest region schedule thus far,” Cutcliffe said. “They’re a very talented team. We know that it’s a challenge. We know we’ve got to go down there and play really well. They’re in the same scenario. They’re saying they need to win out to have a chance to make the playoffs.”

Friday provides an opportunity for the Charger offense to feast on a struggling Columbus defense. The Falcons are giving up nearly 34 points per game. In their win over DeSoto Central the Jaguars still managed to put 28 points on the scoreboard.

The Chargers are averaging 19.6 points a game.

On the other side of the ball the Charger defense has the chance to keep riding the momentum from last week’s shutout and six takeaways. C.J. Terrell came away with three interceptions for his biggest performance of the season. One interception turned into a pick-six.

The Chargers are holding opponents to 10.5 points a game.

“Our defense is such a veteran group.” Cutcliffe said. “Those guys have handled themselves really well all year and been consistent all year in the way they prepare and go about their business.”

Lafayette looks to get back on track against Center…