Water Valley travels to Independence with a playoff berth at stake 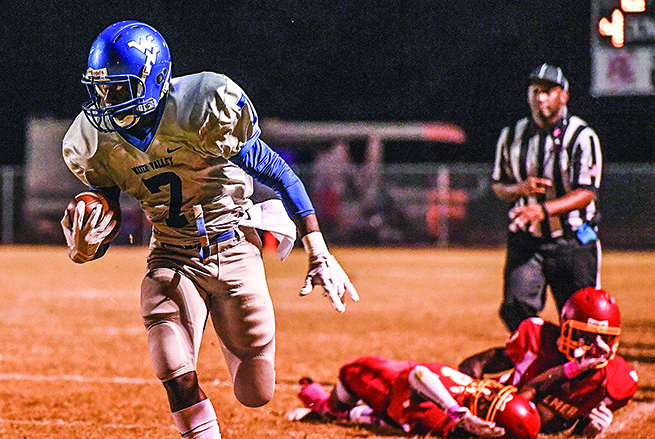 Water Valley received votes in the latest AP poll for Class 3A. Beginning this week they will have the opportunity to show they deserved them and more.

If they can escape with a win, Water Valley will be back in the playoffs for the first time since 2015. A win would also set up a shot at claiming the region championship next week when they host North Panola (8-0).

“We started this back in November before four other (teams) did because we didn’t make the playoffs,” Water Valley head coach Brad Embry said. “We’ve been working for a long time to get to this opportunity. Now’s the time to put the gas pedal to the floor.”

The potent offense Water Valley has put together this season has had to do a little patchwork the past couple of weeks. Top running back Trenderrious Brock suffered what Embry called a ‘tweaked knee’ and is day-to-day. Brock — a junior who was coming off another injury he suffered last season — has rushed for 716 and 15 touchdowns, leading the Blue Devils.

Stepping up in Brock’s place has been junior Tay Rucker. Last week against Coahoma AHS Rucker rushed for 161 yards and two touchdowns on 16 carries. His season totals are up to 442 yards and seven touchdowns.

“Since Brock has gone out Rucker has done a great job,” Embry said. “It’s about everybody. Our line was continually, I believe, getting better so that makes whoever’s carrying the ball do well. …It’s a team thing. I think that’s why we put someone else in there and they’re still doing a good job of running the ball.”

Last season Independence head coach Richard Russo exacted a little revenge on his former team when the Wildcats (4-5, 1-2) won 48-20 on their way to a runner-up finish in the region standings.

It was the first win over Water Valley since 2009, ending a six-year losing streak. Independence has only been in 2-3A since 2013.

It has been an up and down season for Independence, literally. The Wildcats have traded wins and losses each week. Last week they fell to M.S. Palmer 30-13 in a surprise upset.

“Coach Russo is a friend of mine and done a good job and they’re a well-coached football team,” Embry said. “We know we’ve got our work cut out for us. It will definitely be a tough test for us and that’s good. We’re fine with that.”