No. 24 LSU runs over Ole Miss in Magnolia Bowl 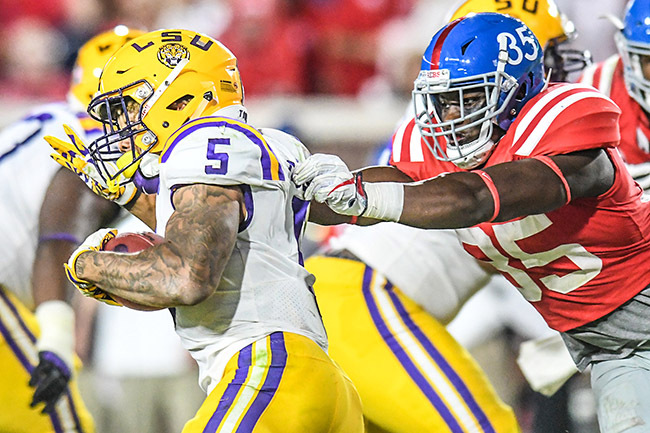 That was the recipe for No. 24 LSU’s 40-24 win over Ole Miss on Saturday night at Vaught-Hemingway Stadium.

The return of Ed Orgeron to Oxford as a head coach was the main storyline all week heading into Saturday’s game but Guice quickly changed that. The junior ran for 276 yards and a touchdown on 22 carries.

The biggest storyline for Ole Miss (3-4, 1-3 Southeastern Conference) became the health of Patterson. The sophomore qb appeared to injure his right knee when throwing a deep ball that was intended for D.K. Metcalf but was picked off by Grant Delpit late in the second quarter.

Backup quarterback Jordan Ta’amu came in for the final drive of the first half while Patterson went to the locker room.

Patterson returned in the second half but was not himself, favoring the knee which had a brace on it. He finished the night with 116 yards, zero touchdowns and three interceptions.

After the game, interim head coach Matt Luke called it a sprained knee but would know more after tests.

Jordan Wilkins rushed for 86 yards on 13 carries and had a touchdown. Eric Swinney and Ta’amu combined for 40 yards on six carries. Sophomore running back D’Vaughn Pennamon had the other Rebel touchdown with a four-yard run late in the game.

Kicker Gary Wunderlich kept the Rebels in the game early, converting three field goals with his longest coming from 39 yards out.