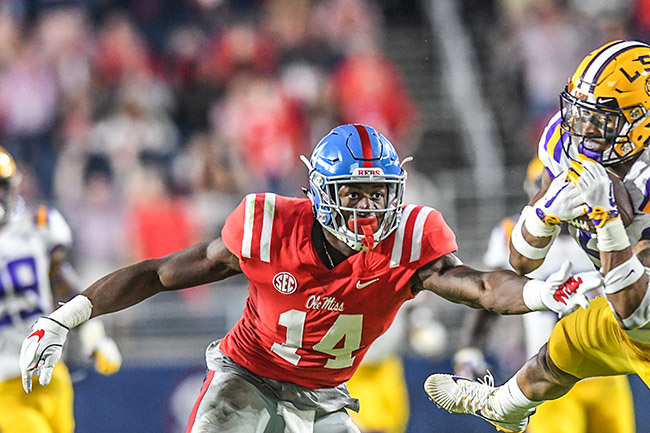 The Southeastern Conference’s top passing offense was no match for the league’s fifth-ranked pass defense Saturday at Vaught-Hemingway Stadium.

Ole Miss’ normally high-powered air attack never got going against LSU in a 40-24 loss. Quarterback Shea Patterson came in leading the conference in passing yards (2,143) and passing yards per game (357.2) but finished completing less than 50 percent of his passes (10 of 23) for the just the second time this season for a season-low 116 yards and three interceptions.

It was just the second time this season Patterson didn’t find the end zone through the air. Ole Miss was held to three field goals until Jordan Wilkins ripped off a 28-yard touchdown run with 4:11 left in the third quarter to cut the Tigers’ lead to 23-16, but Ole Miss could never catch up with its offense missing the explosive passing plays it’s grown accustomed against an LSU defense that came in allowing just 170 yards a game through the air.

“I just think you’ve got to give them a lot of credit,” Ole Miss interim coach Matt Luke said. “They didn’t change anything. They just went out and played coverage, and they did a nice job.”

Patterson completed just one pass for more than 15 yards. Tight end Dawson Knox, who had rarely been targeted through the first four games he’s played (four catches), was the Rebels’ leading receiver with five catches for 72 yards.

“We locked Ole Miss down,” said LSU corner Kevin Toliver, who had one of the picks. “Everybody thought they were just going to just throw the ball around on us.”

Patterson’s health had something to do with it with the sophomore leaving the game late in the first half after spraining his right knee. He threw for just 33 yards in the first half and didn’t fare much better while favoring the knee in the final two quarters, completing just five of his 14 passes with two interceptions in the second half.

But the Tigers’ blanket coverage played its part. Toliver and fellow corner Andraez Wiliams locked up Lodge and DK Metcalf (three combined catches) on the outside, routinely knocking passes away from the duo. LSU also rarely let A.J. Brown, the SEC’s leading receiver coming in, get free as the sophomore finished with just four catches for 39 yards.

“You really have to give the credit to LSU,” Longo said. “They did a really good job on 50-50 balls and really did a good job of getting their hand through the catch point.”

The few chances the Rebels mustered fell by the wayside.

Patterson’s well-placed deep ball to Lodge in the first quarter fell through the junior receiver’s hands deep in LSU territory on a drive that ultimately ended in a punt. Another pass intended for Lodge went off his hands in the second half and was picked by safety John Battle.

It was that kind of night for an Ole Miss passing that looked nothing like its usual self.

“We were banking on those one-on-one matchups,” Longo said. “We didn’t make the most of them. I think we had a couple other opportunities that we could’ve taken advantage of early, and I’m frustrated that we didn’t. I think the kids played hard. I just don’t think we made the plays we had to and LSU did.”

More of the same

Ole Miss began the night 117th nationally against the run and did nothing to improve on that.

Derrius Guice gashed the Rebels for 276 yards on just 22 carries — an average of 12.5 yards per carry. The Tigers’ junior running back, who came in averaging 73 yards per game, had 98 yards on his first six carries and 126 by halftime.

Guice’s performance came after Leonard Fournette set a then-LSU record with 284 yards against Ole Miss last season. The Tigers have rushed for 704 yards in the teams’ last two meetings.

“They didn’t do anything different,” defensive coordinator Wesley McGriff said. “They executed and we didn’t execute. … You’ve got to set the edge against this run team, set it with big people, and you’ve got to tackle Guice. And we didn’t do that.”

For the first time this season, Knox was targeted often and responded with his most productive game of the season.

Knox caught five passes for 72 yards, both career-highs. The 6-foot-4, 250 had just four receptions totaling 60 yards coming into the game.

His 40-yard reception in the second half was also the longest of his career. Knox missed the first two games of the season with a foot injury, but Longo said Knox is starting to feel “really good,” which is allowing his role to expand.

“That’s part of our plan. We want to get him more and more involved in the offense,” Longo said. “As I’ve said countless times, he’s that hybrid kid that did a great job covering ground in the pass game down the field, and you saw that tonight.”

LSU has won six of the 10 meetings since the teams started playing for the Magnolia Bowl trophy in 2008. … Luke suffered his first loss at Vaught-Hemingway Stadium as the Rebels’ interim coach. … Sophomore safety Jaylon Jones had a career-high with 194 all-purpose yards, all of which came on kickoff returns. It was the second-most return yards in a game in school history.

No. 24 LSU runs over Ole Miss in Magnolia…