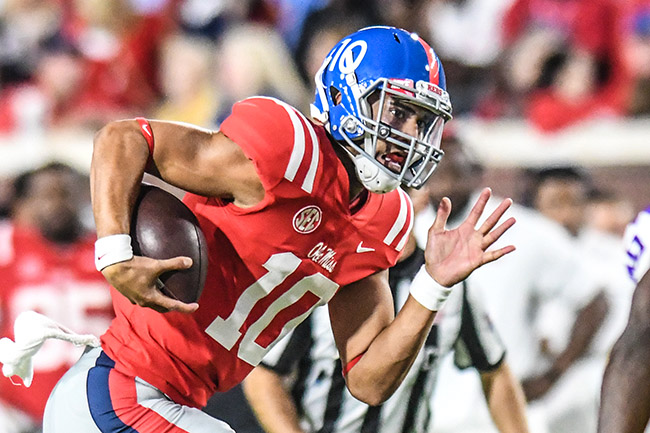 If things went according to plan this season, Jordan Ta’amu wasn’t going to get a ton of snaps.

The Rebels got an official diagnosis on the extent of the injury quarterback Shea Patterson suffered in Saturday’s 40-24 loss to LSU, and it was more than a sprain. A torn posterior cruciate ligament in Patterson’s right knee has cut the sophomore’s season short, suddenly changing Ta’amu’s role dramatically.

Ta’amu was Patterson’s backup for the first six games, playing sparingly in three of them. He got his most extensive action with Patterson in and out against LSU after suffering the non-contact injury late in the first half, going 7 of 11 through the air for 78 yards while adding 20 yards on the ground on three carries.

So what exactly are the Rebels getting in their new signal caller?

Ta’amu signed with Ole Miss after two seasons at New Mexico Military Institute, where he accounted for 3,342 yards of total offense (3,014 pass, 328 rush) and 39 touchdowns as a sophomore. The 6-foot-2, 212-pounder’s 334.9 passing yards per game ranked third in the NJCAA while his 32 touchdown passes ranked second nationally.

Ta’amu enrolled early and got a head start on learning first-year coordinator Phil Longo’s offense by going through spring practice. Ta’amu said during training camp in August he was “pretty used” to the pace at which the Rebels are running the offense since he operated a similar spread system at NMMI.

Longo said the playcalling won’t change much with Ta’amu behind center with the 6-foot-2, 212-pounder just as likely as Patterson to use his legs to make plays. Ta’amu, rated the fourth-best dual-threat quarterback coming out of junior college last year by ESPN, could be a weapon in the read-option game.

It’s the mechanics in the passing game that Ta’amu has been giving the most attention.

“I’ve got the speed and the ability to throw on the run,” Ta’amu said during training camp — the only interview he’s given at Ole Miss to this point. “I’ve just got to work on my accuracy a little bit more and just reading the defense a lot. Just got to work on that and get better every day.”

Ta’amu will also have to get used to the speed of the game in the SEC as he gets set to make his first start against Arkansas on Saturday at Vaught-Hemingway Stadium (11 a.m., SEC Network), something he combated with short and intermediate throws against LSU. He led a 10-play, 66-yard drive in 1 minute, 16 seconds just before halftime to get the Rebels in range for one of Gary Wunderlich’s three field goals before completing all five of his passes for 55 yards on Ole Miss’ final possession to help the Rebels eventually reach the end zone on D’Vaughn Pennamon’s 4-yard touchdown run.

Luke praised the way Ta’amu operated the offense against the Tigers and insisted the playbook is wide open for his new starting quarterback.

“I think that gave him some valuable experience where if that is the case (that he has to play), I’ve got a lot of confidence in him,” Luke said.