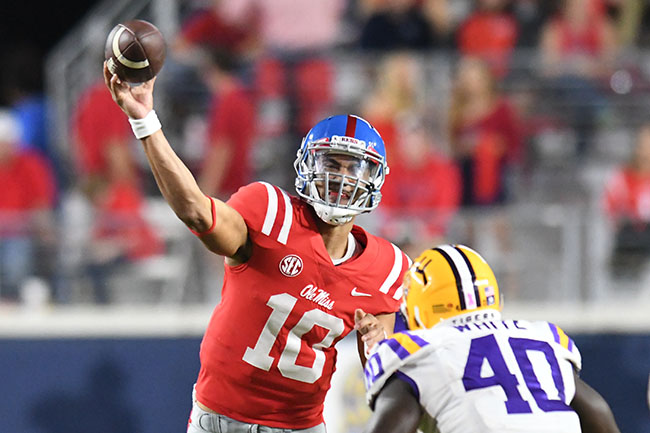 Jordan Ta’amu didn’t want it to happen like this.

Ta’amu’s ascent to the top of the depth chart came the unconventional way. He’s Ole Miss’ starting quarterback after Shea Patterson suffered a torn posterior cruciate ligament in his right knee that ended his season after seven games.

The news of losing the Southeastern Conference’s leading passer was hard for everyone to take, including Patterson’s backup.

“I was devastated,” Ta’amu said. “I wouldn’t wish that upon anybody.”

Regardless how he got here, Ta’amu has his turn to run the Rebels’ offense. His teammates immediately gave the junior college transfer a vote of confidence.

“After Shea got hurt, I’ve been getting texts and all that saying they’ve got my back,” Ta’amu said. “I’ve been texting them saying I’ve got their back, too, and I’ll give it my all like how Shea gave it his all. That’s all I can do.”

Patterson was eighth nationally in passing yards per game (322.7) at the time of his injury, pacing the SEC’s top-ranked passing offense. He’d thrown for 2,259 yards and ranked second in the league with 17 touchdown passes.

Ta’amu admitted there’s a different level of expectations that comes with being the guy behind center, particularly when stepping in for a quarterback putting up those kind of numbers. But he’s staying true to himself as he prepares for his first start for Ole Miss on Saturday against Arkansas at Vaught-Hemingway Stadium (11 a.m., SEC Network).

“Being the starting quarterback is a lot more pressure, a lot more media and social media blowing up,” Ta’amu said. “I’ve just got to stay humble, continue to do my thing, go out there and prove to everybody that I can run this offense.”

Ta’amu showed signs of that when Patterson went down against LSU in the first half and when Patterson left the game for good early in the fourth quarter. He led a scoring drive on the Rebels’ final possession of the first half and completed five passes on their last possession of the game that ended in a touchdown. He finished 7 of 11 for 78 yards through the air while adding 20 rushing yards on three carries.

It’s been a gradual process for Ta’amu learning first-year coordinator Phil Longo’s offense since signing with Ole Miss out of New Mexico Military Institute, where he racked up 3,342 yards of offense and 39 touchdowns last season. But he quickly caught on, doing enough in the spring to lock up the backup job before using training camp to further immerse himself in the offense.

The biggest transition for Ta’amu has been getting used to the speed of the game in the SEC. He’s played in three games this season with all of his passing attempts coming against LSU.

“Everything is a lot faster, everyone’s bigger and everyone is more athletic and all that,” he said.

His sample size in the run game is small (six carries), though his 8.7-yards-per-carry average offers a glimpse into the kind of threat Ta’amu is with his legs. The 6-foot-2, 212-pounder said he models his game after former Heisman Trophy winner and Tennessee Titans quarterback Marcus Mariota.

“People call me Marcus out there,” said Ta’amu, who, like Mariota, hails from Hawaii.

Longo said he doesn’t envision the playcalling changing with Ta’amu behind center, and at this point, there’s nothing in the playbook the Rebels’ new quarterback doesn’t feel comfortable running.

“My confidence level is pretty high,” Ta’amu said. “I’ve just got to be me and keep playing.”

Ole Miss quarterback Shea Patterson out for season with…