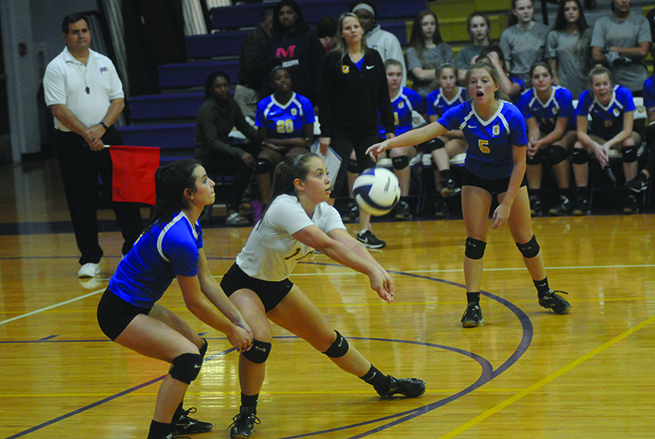 SOUTHAVEN — There will not be a repeat performance by the Oxford High volleyball team.

The Jaguars advanced to Thursday’s Class III semifinals at Mississippi State University while the Chargers  (20-10) are left preparing for the offseason and 2018.

It was the third time Oxford and DeSoto Central (39-2-1) have met this season with the Chargers struggling every time.

Oxford’s Set 3 win on Tuesday was the only dropped set by the Jaguars in all three contests. It was only the tenth dropped set all season for DeSoto Central.

The first set looked like more of the same.

DeSoto Central jumped out to a 15-5 lead in the opening set before Oxford managed to put some offense together but the Jaguars took a 1-0 lead handily.

“We had a lot of rallies the first set even though the score didn’t refelct that,” Hengler said. “We had a lot of errors but our passing was so consistent all night long. I have never seen any team in this whole league pass as well as these girls did on serve-receive tonight.”

Whatever was not working for Oxford in the first two sets mangaged to get worked out in time for the third.

With a sweep and their seeason’s end in sight the Chargers became the aggressors, jumping out to a 15-7 lead.

Being the experieneced team they are — DeSoto Central won Class III in 2015, 2014 — the Jaguars rallied and got within four points before Oxford closed the set out for the point.
The fourth set saw more competitiveness from both sides but the Jaguars were too much.

Trailing by as much as six points during the set, Oxford rallied to make it a 22-20 score but DeSoto Central used a 3-2 run to move on to Thursday and a date with the regining Class III champion Hancock.

“It was just the matter of making the least amount of errors,” Hengler said of thier success in Set 3. “And it was hitting. It was putting the ball away. We just really struggled with that tonight.”

Grace Joyce finished with eight kills and one ace while Savannah Nagle had six kills and 12 digs.

“I think it’s been great as far as the group of girls I’ve had,” Hengler said of her first season. “It’s more than I could ask for, for my first team. They came in and they had a lot of talent.”