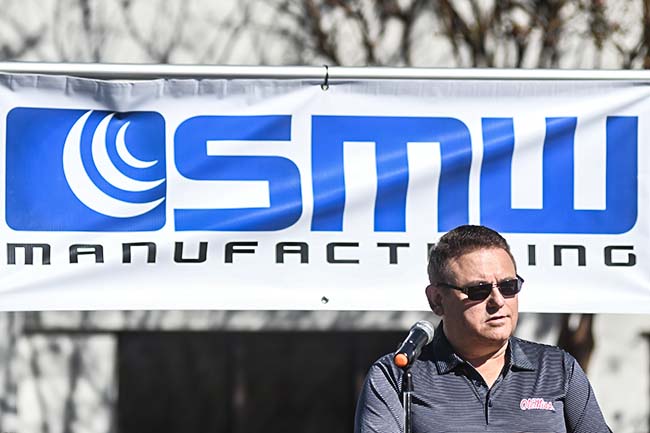 The company took over operations at the former Caterpillar facility that closed last year, leaving more than 200 people without jobs.

However, SMW plans on hiring up to 50 employees by the end of 2018 and currently has  more than 30 employees, many of who worked previously for Caterpillar.

“We’re most impressed with the workforce we had the opportunity to select, and this team is among the finest I’ve had the privilege to work alongside,” said SMW General Manager and Vice President of Operations Rich DesCoteaux.

During the ceremony, Reeves said job creation — bringing new and better jobs to Mississippi — is the No. 1 priority of state government.

“The most important people here in this crowd are the folks with the SMW patches on their shirts,” Reeves said. “What a wonderful opportunity this is to be in this community and to see the capital being invested in this community, which ultimately leads to job creation.”

Oxford Mayor Robyn Tannehill and Lafayette County Board of Supervisors President Jeff Busby both welcomed SMW to the community and said SMW was an excellent “fit.”

The industrial park is seeing a lot of activity lately. In addition to SMW Manufacturing, two other new industries are moving into the park. There is also a future expansion planned at SWM/Blauer Company th at provides uniforms for law enforcement and fire responders that has been located in the Lafayette County Industrial Park for 20 years.

“We’ve got plenty of expansion going on in the park,” said Jon Maynard, president and CEO of the Oxford-Lafayette Chamber of Commerce and Economic Development Foundation.

B&B Concrete is currently building a new facility on 11 acres inside the park.

“They purchased the land a little more than a month ago to expand their operations here in Oxford,” Maynard said.

“Having our own facility in the county would provide local job opportunities, create a separate profit entity for the area, reduce our costs and keep all our costs in the state of Mississippi,” co-founder Will Fountain said recently.

Fountain said the new facility is expected to create 40 jobs in the county by 2021. Furthermore, the facility would act as a sterilization center for third-parties, creating tax revenue for the county.

Medical waste disposal is heavily regulated and uses the autoclave process of sterilization — the same process that sterilizes medical instruments before use on patients. All waste is put into an autoclave and treated with hot steam, killing bacteria and viruses. The waste is then no longer hazardous and is taken to a landfill.

The facility in Lafayette County will use this same process, which is monitored by the Mississippi Department of Environmental Quality.