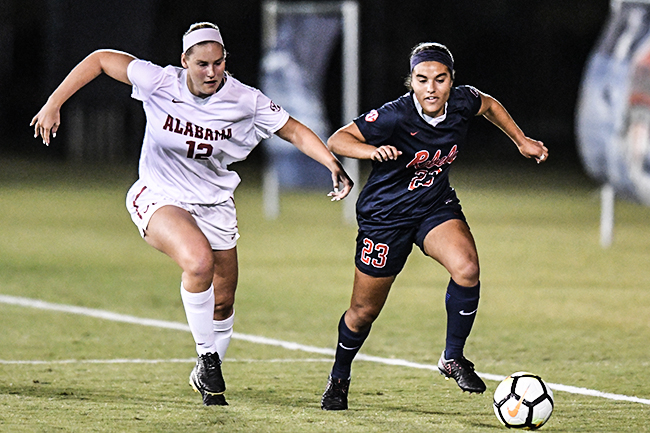 OXFORD, Miss. – After narrowly missing chances to net the game winner throughout the game, a penalty call and conversion spelled heartbreak late in overtime for Ole Miss (10-5-3, 3-5-2 SEC) as Alabama (12-6-1, 4-5-1 SEC) notched a 1-0 victory Thursday night at the Ole Miss Soccer Stadium.

The best opportunity for either side in the first half came in the 14th minute for the Rebels when Channing Foster flew down the left wing and fired in a powerful shot that was saved by Crimson Tide keeper Alex Plavin. Gabby Little corralled the rebound but was unable to put away the chance.

About 10 minutes later, Fiorenzo delivered a tantalizing service off of a free kick, finding the head of CeCe Kizer. Unfortunatley for Ole Miss, Kizer was unable to redirect the header accurately, sending the ball wide for a goal kick.

In the 58th minute, Little came about as close to opening scoring as possible. The sophomore drilled a shot off the crossbar, with the ball coming almost straight down and somehow avoiding completely crossing the goal line.

Little once again nearly broke through in the 81st minute, breaking through the Alabama back line and finding space in the box. However, Plavin was decisive coming off of her line and making a kick save to keep the Rebels off the board.

For the third consecutive match for Ole Miss, 90 minutes wasn’t enough to decide the outcome as the two teams ended regulation in a scoreless tie.

With less than five minutes to play in the second overtime period, Ole Miss was called for a penalty on the edge of the left side of the 18-yard box. Hailey Brohaugh stepped up for the penalty and converted, handing the Crimson Tide the victory.

Up Next
With the loss, Ole Miss is slotted ninth in the SEC Tournament and will play No. 8 seed Arkansas on Sunday in Orange Beach, Ala.

‘We’ve got to find ourselves’: Ole Miss still seeking…