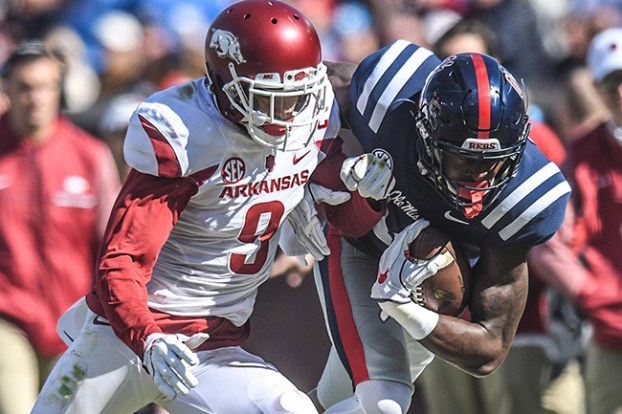 The Arkansas-Ole Miss series has been something of late.

Heart-pounding? Thrilling? Agonizing? Guess it depends on what side of it you’re on, but pick whatever word you want to describe it other than one: Boring.

The teams produced their latest instant classic Saturday inside Vaught-Hemingway Stadium, another one in which Ole Miss was once again left deflated. Connor Limpert’s 34-yard field goal with 4 seconds left lifted the Razorbacks to a 38-37 win, a stunning development considering what the scoreboard showed two quarters earlier.

It happened in the same stadium where just two years ago Arkansas parlayed that miraculous fourth-and-25 lateral into an overtime win that every Ole Miss fan, player and coach involved would just assume forget. That before Arkansas needed a stop on Ole Miss’ final drive last year in Fayetteville to eek out a 34-30 win.

The teams’ last three meetings have been decided by a combined six points, but Ole Miss interim coach Matt Luke wasn’t interested in talking about what’s made the series so competitive all of a sudden. The latest pill the Rebels had to swallow against Arkansas was bitter enough.

“In my mind, this is totally different,” Luke said.

It’s also a painfully different loss from the others the Rebels have had this season.

Ole Miss never led Cal by more than single digits in a game the Rebels lost by 11 last month out West. They stepped into SEC play against Alabama and Auburn — the top two teams in the Western Division — with those games essentially over at halftime with the Rebels trailing a combined 70-6 at the break. Against LSU last week, Ole Miss trailed from the first quarter on in a 40-24 loss.

In other words, Ole Miss simply lost to better teams through the first half of the season. That wasn’t the case against Arkansas.

The Razorbacks entered Saturday’s game losers of three straight and in the Western Division cellar without a league win. They lost their first four conference games by a combined 97 points, sparking conversation about Bret Bielema’s job security.

Ole Miss seemed ready to help the Razorbacks’ coach out the door in the first half.

With Jordan Ta’amu looking more like a seasoned vet than a first-time starter at quarterback and a defense that was stopping an Arkansas offense also playing with a backup signal caller in Cole Kelley, the Rebels made it look easy in building a 31-7 lead midway through the second quarter with each of their first five possessions ending in points.

The Rebels looked primed to add to that lead when Octavious Cooley rumbled deep into Arkansas territory after hauling in one of Ta’amu’s passes, but Cooley fumbled at the end of the run. Arkansas found the end zone 10 plays later. Ta’amu followed with an interception on Ole Miss’ next possession, and Arkansas scored three plays later to end the half with new life despite nearly being doubled up (415-216) in total yards through the first two quarters.

Arkansas continued its newfound momentum to start the second the half with an eight-play, 63-yard touchdown drive to draw within a field goal before Ole Miss tacked on a pair of field goals to stop the Razorbacks’ 21-0 run.

But the Rebels gave Arkansas another gift with 6 minutes left in the game when Ta’amu tried to pull the ball late from Eric Swinney’s grasp on a read-option, leading to a fumble that Kevin Richardson scooped up and returned 22 yards for a touchdown.

All of Ole Miss’ charity work allowed Arkansas to stay close enough that Limpert found himself with that final field goal attempt to finish the comeback. The Razorbacks’ kicker split the uprights, sending Arkansas to a win that had to be seen to be believed.

“It basically came down to our mistakes costing us the game,” Luke said.

Luke called it a “gut punch” before he and his players said all the right things about shifting their focus to next week’s game at Kentucky. After the way the Rebels lost this one, it may take a little longer than usual.

It looked harmless enough. Sure, the change of possession hurt an Ole Miss team that can’t afford to have many... read more