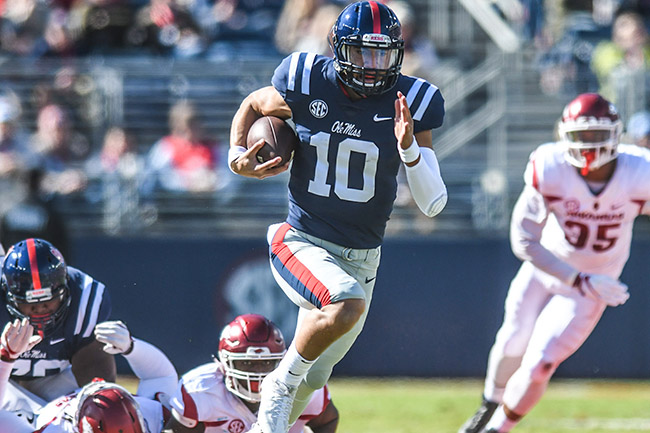 There was some of both for Ole Miss’ quarterback in his first career start on Saturday at Vaught-Hemingway Stadium in the Rebels’ 38-37 loss to Arkansas — a game in which Ta’amu and the offense started hot but fizzled out with some self-inflicted miscues along the way.

In his first full game in place of the injured Shea Patterson, Ta’amu showed poise and comfort running the Rebels’ offense at times. By the time it was over, the junior college transfer accounted for 444 total yards and two touchdowns.

“I thought he played real well,” offensive coordinator Phil Longo said. “For his first start and the preparation he put in, I thought he did a great job.”

Ta’amu was particularly sharp early, leading Ole Miss to scores on each of its first five possessions. He completed passes of 26 yards to DaMarkus Lodge and 44 yards to DK Metcalf on the Rebels’ second drive to help set up Eric Swinney’s 2-yard touchdown run before finishing Ole Miss’ next possession by sprinting through the middle of the Razorbacks’ defense for a 49-yard score.

Ta’amu had 163 of his yards after a quarter and added eight more on his second touchdown run with 10:51 left in the second quarter that put the Rebels up 31-7.

“It gave us a lot of confidence,” Ta’amu said. “I knew we could move the ball against them. I just know we were rolling and we just needed to keep rolling.”

Ta’amu’s first real mistake resulted in the latter of two straight turnovers Arkansas used to get back in the game. He was late and behind with a pass over the middle that was intercepted by Josh Liddell and gave the Razorbacks prime field position at Ole Miss’ 21-yard line. Arkansas found paydirt for the second straight possession three plays later to make it a 10-point game at the half.

“I think I could just read faster,” Ta’amu said, adding he should’ve come off his primary receiver and gone to his second read. “Held on to one of my routes too long and that caused an interception. Just make smart decisions and make sure I take care of the ball.”

It was one of just two wrong reads offensive coordinator Phil Longo said were made in the passing game by Ta’amu, who completed 20 of his 30 attempts for 368 yards — the most ever for an Ole Miss quarterback in his first start. But only 132 of those yards came after halftime while Ta’amu was held to minus-9 yards rushing over the final two quarters as Arkansas ratcheted up the pressure and got more physical with Ole Miss’ receivers with frequent press coverage on the outside, Ta’amu said.

It affected his decision-making, which included a late fumble on what Ta’amu called “miscommunication” with Swinney on a read-option. Swinney thought he was supposed to take the ball while Ta’amu wanted to pull it. Instead, Arkansas’ Kevin Richardson ran the other way 22 yards yards for a touchdown that pulled the Razorbacks within 37-35 with 6:01 left.

“I take full responsibility for that, and we just didn’t have that connection when we met,” Ta’amu said.

Interim coach Matt Luke didn’t want his quarterback putting the blame on himself afterward but rather to grow from the learning experience that comes with playing his first full game behind center in the SEC.

“I think he’s in there blaming himself but really proud of him in his first start,” Luke said. “Did a lot of really, really good things. We’re going to build on those. I think you can dwell on the negatives … but we’re going to move forward with the positives and build on it for next week.”