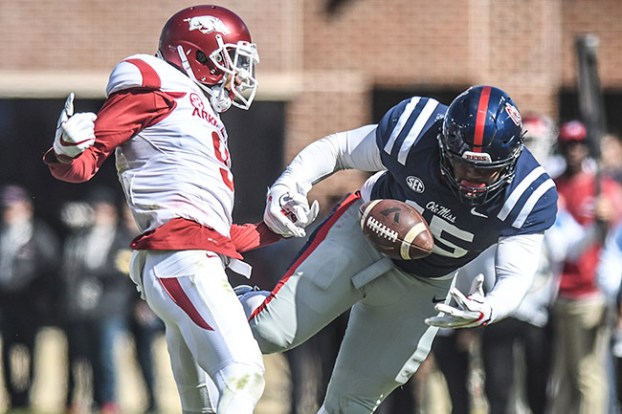 With 11 minutes left in the first half Ole Miss led Arkansas 31-7.

When the clock hit zero in the fourth quarter Arkansas defeated the Rebels 38-37.

The Razorbacks used three Ole Miss turnovers and a timely kick by Connor Limpert in the final seconds to fuel a 31-6 rally, overcoming their early 24-point deficit.

“Three turnovers. You can’t turn the ball over and expect to win an SEC football game,” Ole Miss head coach Matt Luke said after the game. “There’s no easy answer to this one. …I want so badly to get a win for these guys.”

Arkansas scored 21 points off the Rebel turnovers, which began with a fumble by tight end Octavious Cooley, which was recovered by the Razorback’s Santos Ramirez midway through the second quarter. Cole Kelly would hit Deon Stewart for a 23-yard pass to make it 31-14.

On the very next drive Ole Miss quarterback Jordan Ta’amu threw his first interception as a Rebel when Josh Liddell picked it off and went 54 yards on the return. Kelly would strike again on a nine-yard pass to Cheyenne O’Grady to give Arkansas 14 points in a two-minute span.

In the fourth quarter up 37-28, Ole Miss coughed up the ball once again when Ta’amu and running back Eric Swinney failed to complete the handoff when the ball was dropped. Kevin Richardson II was there for the scoop-and-score from 22 yards out.

A 34-yard field goal by Limpert with seven seconds remaining was enough to give Arkansas an improbable win.

Ta’amu finished with 368 yards and zero touchdowns through the air. On the ground he rushed for 91 yards and two scores on nine carries. One of Ta’amu’s scores came off a 49-yard run up the middle.

While playing on one bad ankle, Jordan Wilkins rushed for 119 yards and a touchdown on 16 carries.

Connor Limpert connected on a 33-yard field goal and Arkansas completes the comeback. Razorbacks were down 31-7 at one point... read more