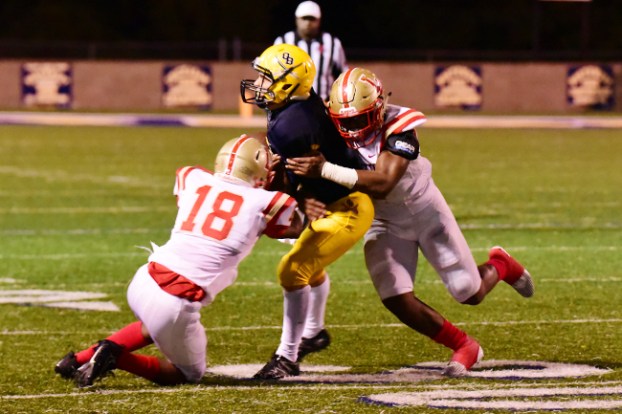 OLIVE BRANCH – The weather was an immediate factor in the Lafayette Commodores’  20-9 loss to the Olive Branch Conquistadors , but Lafayette still managed to make it a close game until the waning moments.

The Commodores (3-7, 3-3 Region 1-5A) had a two-score lead with five minutes remaining before Olive Branch rallied for the win.

Lafayette Commodore Head Coach Michael Fair attributed his team’s success to their preparation leading up to Friday.
“We had unbelievable practices this week,” Fair said. “Obviously the weather didn’t help us, but we didn’t lose this game because of effort. What this loss boils down to is not because we didn’t try hard enough. We had a 5A team on the ropes and we let them off. From this point forward, we are going to act right.”
The game started with an Olive Branch fumble that the Commodores would turn into a touchdown. Lafayette’s Randy Anderson would convert a 4th down to keep the drive alive and a score on a draw from three yards out to start off the night’s scoring.
After a few defensive stands, including a fumble recovery from Jason Sawyer that set up a Robby Langley field goal, the Commodores had a nine point lead heading into halftime.
With the weather finally adhering to the fans and players wishes, the second half consisted of more scoring. With three minutes left in the third quarter, Olive Branch would score their first touchdown of the game, closing the Lafayette lead to just two.
The scoring would cease until five minutes left in the fourth quarter, where Cameron Mosley would score a three yard touchdown to give the Conquistadors a lead they would not lose. The Commodores would fail to generate much offense late in the game, while Olive Branch would tack on one more score to increase the Conquistador lead to eleven. Lafayette started off strong, but Olive Branch managed to steal momentum and hold off a threatening Commodore attack.
“We have won with dignity and pride, and we are going to lose with dignity and pride,” said Coach Fair.
“Anybody can act right in a win, but how you handle this is when you see who you really are. There a lot of good, young men on my football team and we are going to handle this the right way.”
Lafayette will host Lake Cormorant next week with a postseason berth at stake for both teams.

WATER VALLEY — For the first time in six years Water Valley had the opportunity to play for the Region... read more