Inside Ole Miss’ concussion protocol: What players have to do to get cleared to return to the field 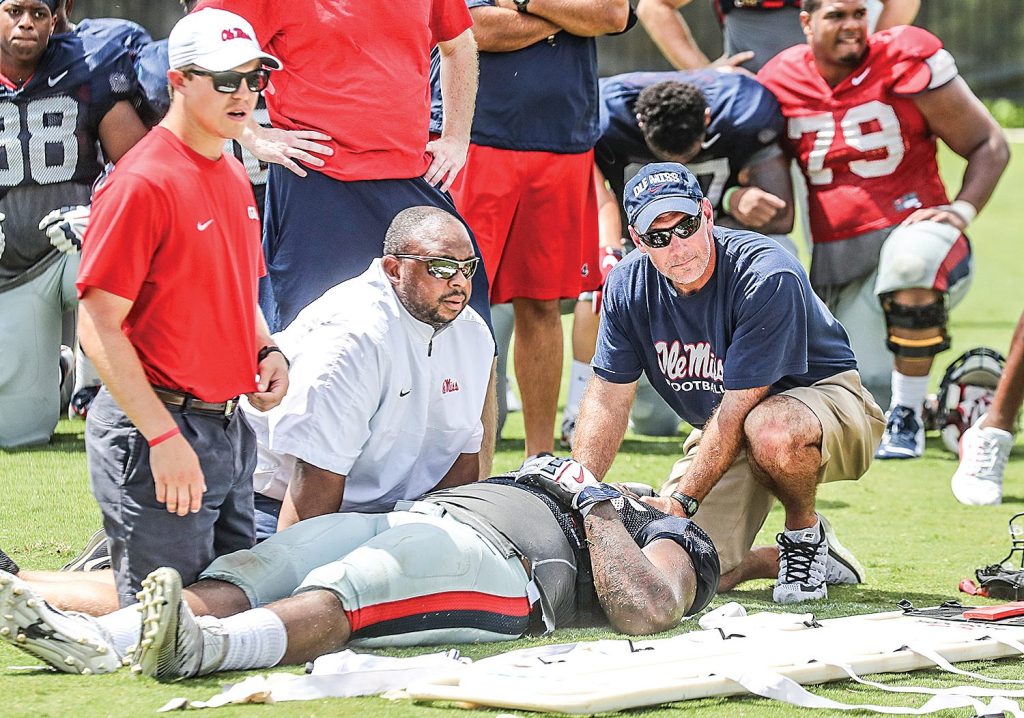 The play started like most of them do. But for Ty Quick, this one didn’t end the same.

During the team portion of one of Ole Miss’ final preseason practices in August, the Rebels’ senior tight end released on a go route deep down the field. Shea Patterson heaved a pass his way, but Quick knew he wasn’t going to be able to make the catch unless he stretched out, exposing himself to the safety coming over to make sure he didn’t corral it anyway.

Quick remembers the hit, but the details of what happened next are fuzzy.

“I kind of blacked out for a minute and then I woke up and I was face down on the ground,” Quick said. “I was like, ‘Wow, I just got hit.’ I just kind of wandered off the field. (The trainers) helped me off, and I pretty much knew then I had a concussion.”

The brief loss of consciousness was a giveaway, but Quick was taken to the sideline for further evaluation, which included a SCAT3, or Sport Concussion Assessment Tool, being assessed to check for other signs such as dizziness, memory loss and disorientation. It began the protocol that every player has to go through after suffering the traumatic brain injury.

“It’s not mild. It’s not Grade 1,” head football trainer Pat Jernigan said. “You either have one or you don’t.”

So how are Ole Miss’ football players treated for a concussion? And what all does the protocol entail before they’re cleared to return to the field?

Before anything else can happen after a diagnosis, the symptoms have to subside. Filling out a daily symptom sheet that’s reviewed by the Rebels’ medical staff is about all the physical work Jernigan wants the player doing within the first 24-48 hours of the injury.

Cell phones are taken away. No computers or TVs either. Just rest.

“They keep it dark and quiet and let you heal pretty much,” said Quick, whose symptoms also included sensitivity to light and nausea.

Players are also forbidden from attending class on the same day they suffer a concussion and can be kept out of film sessions or any other activity that will aggravate the symptoms if recommended by the sports medicine staff, a part of the process referred to as Return to Learn. Academic counselors serve as liaisons between the medical staff and professors to help with any modifications that need to be made to the player’s academic schedule until the symptoms go away.

“Watching a video in class is going to bother them and you don’t want to do that,” Jernigan said. “Watching film here, if they rewind a play and rewind a play, that can make it worse. You just take that out of it.”

Once the player is asymptomatic, he’s put through a couple of tests by Jernigan and his staff to compare to the baseline results of the player’s initial screening as part of the pre-participation physical every student-athlete takes before each season.

The first is the ImPACT test, a computerized neurocognitive exam that gears its questions toward assessing memory. With inquiries ranging from shape identification to pointing out certain colors, the test is designed to gauge how quickly the brain is reacting.

“It challenges you,” Jernigan said. “If you take one normally, it’s hard, so you’ve got to concentrate. That’s the thing it’s testing is how is your brain functioning? You’ve got to be able to decipher what it’s asking you.”

A balance test is also performed to get a gauge of the player’s equilibrium, something Shannon Singletary, Ole Miss’ senior associate athletic director of health and sports performance, said has become one of the most effective ways to measure how severe the concussion is.

“You’ve got swelling on the brain,” Singletary said.

Each position is held for 30 seconds, but any leaning, stumbling, eyes opening or hands coming off the hips counts as an error, which are tallied at the end of each stance. The results of the ImPACT and balance tests are compared to the player’s baseline scores, and if they stray too far, the player has to wait another day to retake the tests until the results are more in sync.

Once that happens, the player can gradually return to daily stages of physical exertion beginning with a light aerobic exercise such as riding a stationary bike. The player then progresses to sport-specific exercise, which for Quick meant getting back to running routes, before graduating to non-contact training drills. Get through all of that, and the player is then evaluated by the team physician one last time before being cleared to return to full-contact practices and games given the player is still asymptomatic.

If symptoms reoccur at any point during testing or practices, the player waits until the next day to restart the protocol at that point before progressing to the next stage.

“It’s a graduated protocol because riding a bike, you might be fine with it,” Jernigan said. “Once you start running around, it might be different. That’s why you do different activities more intense every day to get back.” 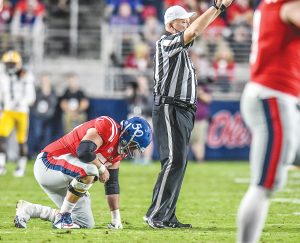 Singletary said the medical staff has treated five football concussions on average over the last four years with many of those players being able to return the week after suffering the injury. For players who’ve had multiple concussions, it may take longer to get through the protocol.

Jernigan, in his sixth year as football’s head trainer, said he’s monitored players who have had to miss three straight games. For Quick, whose preseason blow to the head was his second at Ole Miss, it took nearly two weeks.

“It’s your brain. Once you mess that up, you can’t really come back from that,” Quick said. “They’re real good about letting you go through the protocol. They’re asking how you’re doing but it’s not, ‘Are you coming back? Can you go? Can you go?’ It’s, ‘Don’t rush it, but whenever you get ready, let us know and we’ll go from there.’”

Ole Miss’ protocol, which is universal for every sport, is on par with other schools around the country given the NCAA has what Singletary called a “pretty tight checklist” of what’s required to be in it, including concussion fact sheets, symptom sheets and other educational material that are included in each student-athlete’s medical packet before each season. Singletary reviews the school’s protocol and submits it to college sports’ governing body for approval each summer.

Alterations are made when needed. Singletary said the school’s protocol has been pretty consistent the last three years after adding the balance test as a result of new information showing a correlation between distorted equilibrium and head injuries.

“Any medical profession needs to have continuing education in whatever their practice is so you stay current,” Singletary said. “That’s where you may pick up on something at a conference or in the latest research journal or whatever.”

But Jernigan and his staff don’t see every concussion with the naked eye, sometimes making it tricky to get players who weren’t on the receiving end of a jarring hit yet may be experiencing symptoms into the protocol. They’ve gotten some help with that.

In July, the findings of neuropathologist Dr. Ann McKee’s examination of 111 deceased NFL players’ brains were published in The Journal of the American Medical Association. All but one were found to have chronic traumatic encephalopathy, or CTE, the degenerative disease believed to be caused by repeated blows to the head. That study came two years after the release of the movie “Concussion,” which starred Will Smith as Dr. Bennet Omalu, a forensic pathologist who fought the NFL on his CTE research.

There’s enough awareness about the potential dangers that come with concussions, Jernigan said, that rarely does any player try to tough it out.

“Twenty years ago, guys would say, ‘Oh I’m fine,’” Jernigan said. “But just because of the education component and guys being more aware about it, they say, ‘I’m going to tell somebody.’”

Said Quick, “You see pro athletes talking about their concussion and how it’s affected them in the long run. If I get another one, what’s going to happen? What might happen even though I’ve already had two? It kind of goes through your mind a little bit, but it doesn’t take away from my love of the game.”

It helps Jernigan and his staff get any concussed player the treatment he needs for as long as he needs it despite any beliefs to the contrary.

“The biggest misconception is, ‘They just want them to play in a game,’” Jernigan said. “It’s not that. Here’s what they have to do to pass. If they don’t, they don’t. … We’re doing what we should do to protect these guys, and it’s based on a standard of medicine.”