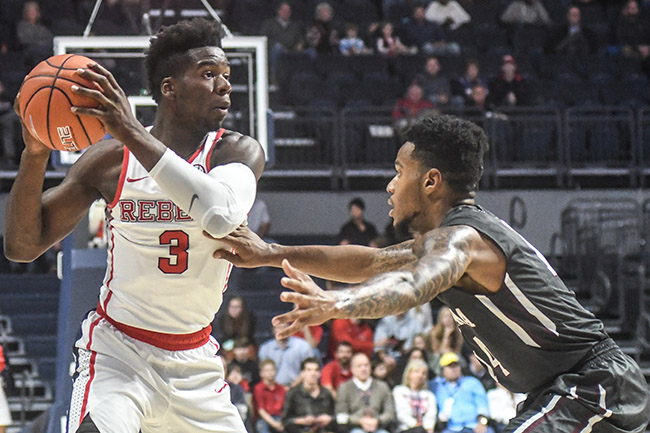 And that’s just to name a handful.

Ole Miss basketball coach Andy Kennedy has produced plenty of backcourt talent during his time in Oxford. In fact, the Rebels’ 12 All-SEC guard selections during Kennedy’s 10-year tenure are second only to Kentucky among SEC programs during that time.

But it’s this year’s collection of guards that may be Kennedy’s best yet.

“I think we have one of the best backcourts in the country to be honest, one through five,” senior guard Deandre Burnett said.

Ole Miss certainly has plenty of production and experience among a group that Kennedy will be relying on to help the Rebels offset the loss of all-league forward Sebastian Saiz and end a two-year NCAA Tournament drought. Ole Miss, fresh off its National Invitation Tournament quarterfinal run, will face North Alabama in an exhibition Sunday before starting the season Nov. 10 against Louisiana at The Pavilion.

Burnett and fellow guard Terence Davis, another one of those All-SEC performers after bursting onto the scene last season as a sophomore, return as Ole Miss’ top two scorers. The preseason all-league selections bring back a combined 31.4 points per game.

Yet Burnett, the Rebels’ leading scorer last season at 16.5 points per game, could find himself squeezed out of the starting lineup with a healthy Breein Tyree back to run the point and graduate transfer Markel Crawford set to start at the wing opposite of Davis.

Tyree gradually progressed after still recovering from reconstructive knee surgery during his last year of high school at the beginning of last season, showing the burst and quickness by the end of the season that define his game. The 6-foot-5 Crawford brings 12.5 points per game and 4.4 rebounds per game from Memphis, where he used his slashing ability to shoot at a 47.8-percent clip.

Crawford’s length and athleticism, which helped him tally 46 steals last season, should also help shore up the Rebels’ defense on the perimeter, which was a sore spot last year for a team that gave up more than 76 points a game. True freshman Devontae Shuler, a four-star signee out of perennial prep powerhouse Oak Hill Academy, will contribute immediately with coaches and teammates already touting the 6-2, 192-pounder as the Rebels’ best on-ball defender.

Burnett, who said he’s been practicing mainly at the point during the preseason, Shuler and fellow freshman Ilya Tyrtyshnik are also capable of running the point if needed. The Rebels’ strength in backcourt numbers could also allow them to go small at times with a four-guard lineup, which could help them push the pace more often than they did a season ago.

Having four guards on the roster who’ve averaged double figures at the high-major level — Tyree scored 7.3 points per game last season but averaged nearly 12 over the final six weeks — could create a problem with only one ball to go around, but Burnett said the group doesn’t care who ultimately takes the shot as long as it’s the best shot.

“We’re all just playmakers and create for others,” Burnett said. “We’ve got a very unselfish group that likes to see others make shots. We see it every day at practice. People turn down good shots to get great shots, and that’s what you need to win.”

And if things go according to plan, there could be more of Kennedy’s guards join Davis and Burnett as household names in the SEC.