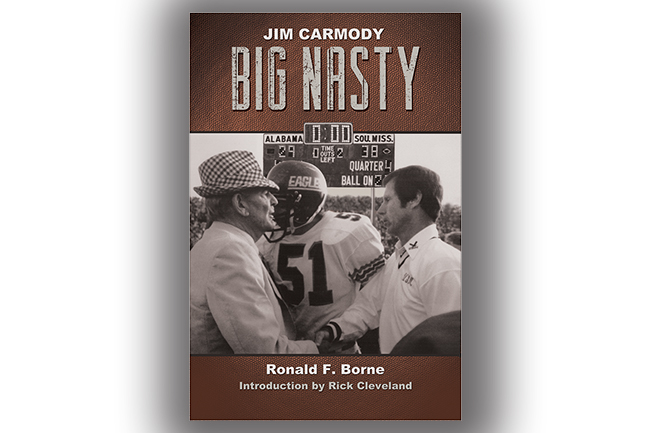 Having four book signings in 12 days at Square Books is an exciting, albeit a hectic time for Nautilus Publishing’s Creative Director and Publisher Neil White, especially when one of the books was written by his own mother and another by a man he called stepfather for 10 years.

“We didn’t plan to have three books launched in the same week, but with holidays and tight scheduling for Square Books, it’s just how it ended up,” White told the EAGLE last week.

The first book signing will be at 5 p.m. tonight; however, the author will unfortunately not be present.

Author and University of Mississippi professor Rob Borne died a year ago, three days after finishing his book, “Jim Carmody: The Big Nasty.” It will be the fourth book Borne authored.

“The Big Nasty” is about the life and times Jim Carmody, one of Mississippi’s “greatest coaches.”

“The Big Nasty is Carmody’s nickname,” White said. “He was truly Mississippi’s coach, coaching at all the state schools at some point.”

Carmody will be at the launch to support Borne’s work.

White said the book signing will also be a tribute to the late Borne, who is also the subject of another book being launched later this week on Friday, written by White’s mother, Jane Stanley.

“Jane: A Memoir by Jane Stanley,” is divided into five section – one for each of her five marriages, although she was married twice to one man. Borne was No. 4.

“For 10 years, he was my stepfather,” White said. “I was an adult when they married, but we were great friends during and after the marriage.”

White admits he was a bit reluctant to publish his mother’s personal memoir.

“But after reading it, I am very proud of it and her,” he said.

Stanley worked for former Ole Miss Chancellor Robert Khayat when he was still vice-chancellor and was best friends with Gertrude Ford. She is now a minister at a church in Gulfport.

“She has a long, rich history in Oxford,” White said of his mother.

The third book being launched on Wednesday is, “From the Chickasaw Cession to Yoknapatawpha,” by Hubert McAlexander.

This work offers glimpses of north Mississippi from the time the Chickasaws were forced by giving up the last of their Mississippi lands and move west, when settlers started flocking to the state and through the time of the Civil War – and how all of this history helped create William Faulkner’s “Yoknapatawpha.”

Nautilus Publishing was started by White in 2010 and publishes mostly nonfiction works. Since its start, Nautilus has published about 60 books. Some of its most notable published books include Khayat’s “Education of a Lifetime,” Jim Dee’s “The Statue and the Fury,” and Mary Ann Connell’s “An Unforeseen Life.”

Nautilus Publishing will launch the fourth book, “Ole Miss Business: The First 100 Years,” next week on Nov. 10. Compiled mostly by White himself, the book is a 200-page illustrated history of the school and takes the reader on a century-long journey from the inaugural 1917 semester of the School of Commerce, led by James Warsaw Bell (its first dean) through the spirited leadership of Ken Cyree, the school’s current dean.

“As boring as the title may make it sound, this book is fascinating,” White said. “There’s scandal, political intrigue, cheating, racism and people at each others’ throats.”

White said the book had several contributors and much of the book comes from a collection of letters from Bell, provided by Campbell McCool.

“I admire the business school for allowing us to write this hard history and tell the unpolished truth,” White said.

White said new books expected in 2018 include a new book by Khayat called “’60”; a book of essays and speeches by David Sansing; and a book by Malcolm White and Julian Rankin, “Oxford’s Cafe Society,” which focuses on the history of arts in Oxford.

Jim Carmody with “The Big Nasty,” by Ron Borne

Hubert McAlexander with “From the Chickasaw Cession to Yoknapatawpha.”

Jane Stanley with “Jane: A Memoir of Family and Faith.”