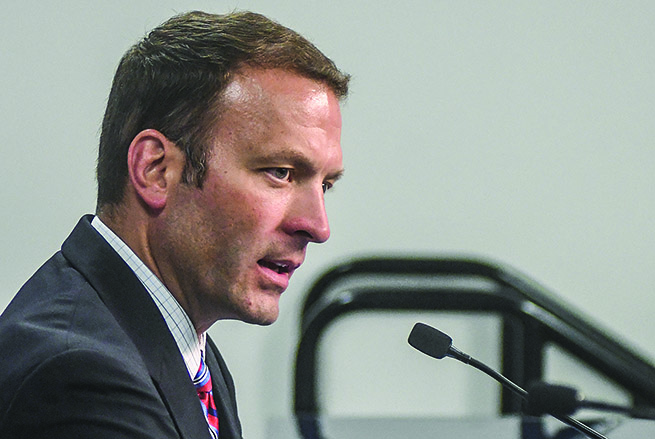 Ross Bjork doesn’t necessarily have a timetable for finding Ole Miss’ next football coach, but the Rebels’ athletic director is ready to pounce.

With just a month left in Ole Miss’ tumultuous season — one that began with Hugh Freeze’s abrupt resignation on top of a bowl ban and consists of a losing record through eight games — Bjork’s search is picking up some traction. He said he’s already had contact with representatives for some coaches.

“Now it’s all heating up and the market’s shifting,” Bjork said. “Now it’s just a matter of what programs are going to open up. You study all of that and you anticipate some of those things, and you have to be ready to strike and be ready to go as the season winds down.”

One job in the Southeastern Conference has already come open at Florida after the school and third-year coach Jim McElwain mutually agreed to part ways over the weekend. Bret Bielema, Butch Jones and Kevin Sumlin are on thin ice at Arkansas (1-4), Tennessee (0-5) and Texas A&M (3-2), respectively, with their teams a combined 4-11 in SEC play.

Bjork may have to move quickly to get his man depending on how many jobs come open and if those schools end up pursuing the same pool of candidates. Ole Miss is also awaiting final word from the NCAA on its infractions case, which could affect whom Bjork could realistically target.

Ole Miss, which is facing 15 Level I charges stemming from its NCAA probe, including the dreaded lack of institutional control, had its case heard by the Committee on Infractions over a two-day period in September. The Rebels, which self-imposed scholarship restrictions in addition to a bowl ban this season, are trying to avoid additional penalties, including the possibility of another postseason ban.

The NCAA typically issues its final ruling six to eight weeks afterward with next Tuesday marking eight weeks since Ole Miss’ hearing ended in Covington, Kentucky. Bjork said he’s preparing for clarity one way or the other.

“That would make it a lot easier,” Bjork said. “We know that. But at the same time, you can have contingency plans in place based on best-case, worst-case or somewhere in the middle.”

Despite the Rebels’ sub -.500 record entering the season’s final month, Bjork insisted interim coach Matt Luke is still a candidate for the permanent job, adding there’s been “no quit” from the Rebels under Luke’s watch.

“Absolutely he’s in the mix. He has to be in the mix,” Bjork said. “I think he’s done a good job holding everything together in a difficult circumstance.”

Yet Ole Miss has hired the firm Turnkey Search to assist with the search, which may be a telling sign of what direction it’s headed. Bjork said the school contracted with the firm to keep the search confidential and to take full advantage of the longer timeframe with which Ole Miss has had to work since Freeze resigned in July.

One of those resources is the firm’s ability to reach out to coaches directly to gauge their interest whereas it wouldn’t be appropriate for Bjork to do so. President and CEO Len Perna and Gene DeFilippo, the managing director, are the firm’s representatives working mainly with Ole Miss.

As for the criteria for the Rebels’ next coach, Bjork said he’s looking for a proven winner with good interpersonal skills and a top-notch recruiter, particularly when it comes to Mississippi. A coach that already has strong relationships with the state’s high school coaches or can build them quickly would be ideal, Bjork said.

“It’s kind of like brushing your teeth,” he said. “You better brush your teeth every day, maybe twice a day, because you get ugly. If you don’t recruit, you get ugly. You’ve got to make sure they’ve got the skills that every day they’re locked into recruiting.”

Bjork said high character will also be paramount in light of the circumstances surrounding Freeze’s resignation. The Rebels’ former coach was forced out after five seasons after a call placed to a number linked to a female escort service was discovered on his university-issued cell phone logs.

“That’s a heightened sense I think in this environment this time around, and we’ve got to do our job,” Bjork said. “That’s to make sure it’s the right person.”

Ole Miss will wrap up its season with the annual Egg Bowl against Mississippi State on Thanksgiving before college football’s first early signing period begins Dec. 20.

“I want to be ready to go as the games wind down on Nov. 25,” Bjork said. “I want to have a good sense of a direction where we might be going or targets and then see if we can pull the trigger as soon as possible.”

Lafayette girls basketball set for run at Class 5A…