Lafayette girls basketball set for run at Class 5A title 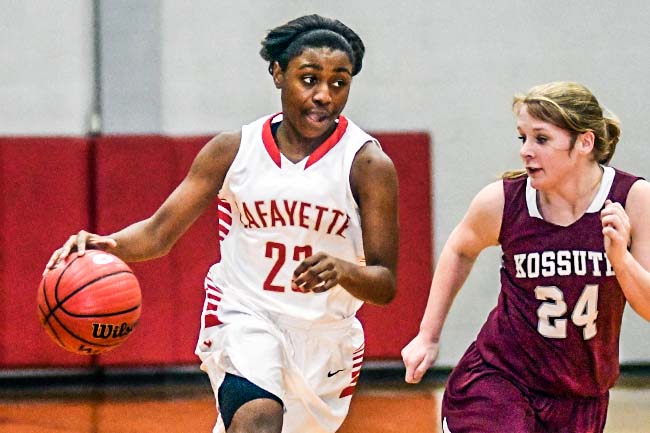 The season has not started and Lafayette is already considered a contender for the Class 5A title. By other teams as well as their own coach.

Now, the only thing left to do is prove them right.

They have the talent to do so with five starters that all saw action last year, including the state championship game. Sophomore Azariah Buford leads a group that includes Mariah Holland, Xhiir Burgess, D’Ericka Booker and Kimaya Dixon.

Lafayette’s starting five accounted for 880 points combined a season ago.

“The starting five are very solid,” Linzy said. “It’s five girls who played last year. Two started. Two others could have easily started. It’s not like they don’t know what’s going on. The next five, they got experience last year. They just need to develop a little more consistency and I think we’ll be fine.”

Some of that consistency took a hit over the summer when Linzy lost his first player off the bench. Ashley Cook transferred to Oxford after relocating inside the Oxford School District.

The confidence level is high for Lafayette even with the loss of last season’s EAGLE Player of the Year Shaniyah Buford. Buford took with her 619 points and an average of three assists per game and 2.2 rebounds a game. Looking to fill her shoes is cousin Azariah who led the team with 4.2 assists and 3.9 steals per game.

Azariah has been around varsity basketball since she joined the team late in her eighth grade season. Having nearly a season and a half of experience already, plus postseason success, has Lynzy confident another Buford will once again dominate the court for the Commodores.

“With her playing those last few games her eighth grade year and then running the offense last year for us it was huge,” Lynzy said. “(Her playing her 8th grade year) is a lot bigger now. …Azariah had a lot of help last year, other people able to handle the ball. This year she’s got help but not as much experienced help handling the ball. This year she seems very confident. I’m very confident in her abilities.”

‘A really good challenge’
Knowing a step up in competition is awaiting them come January when Region 2-5A play begins, Lynzy bulked up the front half of their schedule in November and December. They begin the season on Saturday with a game against Tupelo in the Hound Dog Classic (7 p.m.).

Games against Ingomar, Kirk Academy in early December and Belmont in the Annual Tangle on the Trail at Pontotoc on Jan. 5 highlight some key tests for the Commodores. Fort the first time in nearly a decade Lafayette and Oxford will play each other twice this season on Dec. 15 at Oxford and Jan. 16 at Lafayette.

Lafayette will also play Olive Branch — who won the Class 6A state title before being stripped of it due to an ineligible player — on Dec. 30 in the Dominoes Challenge at South Panola. The Lady Quistors, who moved down to Class 5A this year, are not eligible for postseason play this season due to a ruling handed down by MHSAA in October.

Their region consists of Class 5A state runner-up from a season ago in West Point along with Saltillo and Grenada.

“I think 5A is going to be a really good challenge for us,” Lynzy said. “I think we can play with anybody, but we’ve got to step up our game.”