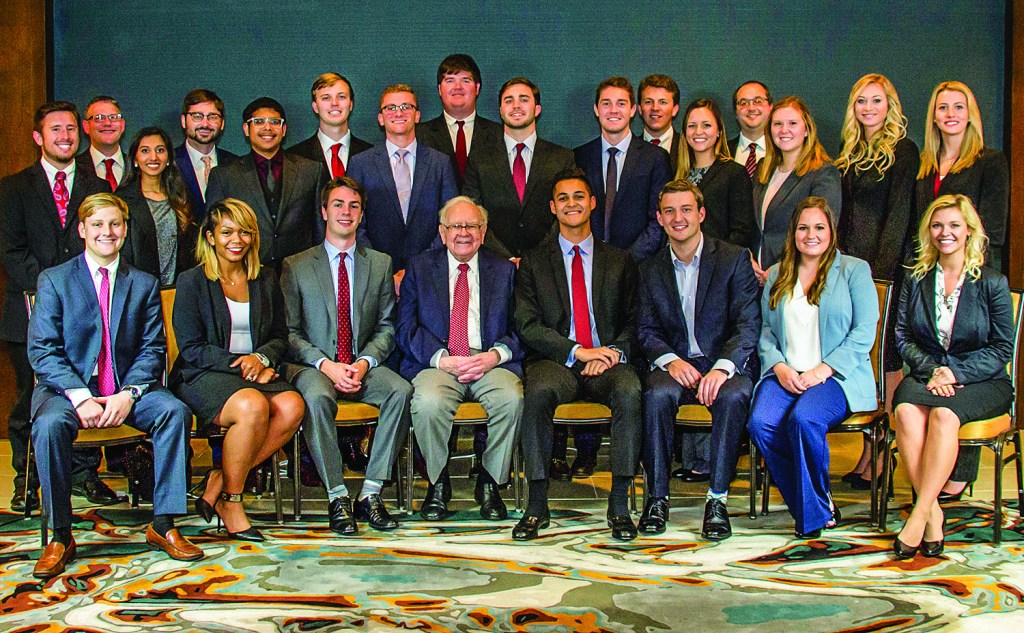 A group of University of Mississippi students meet Warren Buffett, better known as the "Oracle of Omaha," during a recent face-to-face conversation at his headquarters in Nebraska. (Photo/Valerie Wham)

A group of University of Mississippi students got career advice and wisdom from Warren Buffett, better known as the “Oracle of Omaha,” during a recent face-to-face conversation at his headquarters in Nebraska.

This was the first time the UM School of Business Administration had participated in such an event, but the experience proved to be invaluable to students, Dean Ken Cyree said.

“We are thrilled to have our students experience the opportunity of a lifetime by meeting with Mr. Buffett,” Cyree said. “His business wisdom and impact on the U.S. and the global economy is legendary, and his willingness to share it with our students is amazingly generous.”

Buffett is Chief Executive Officer and Chairman of Berkshire Hathaway. As of August, he was recognized as the second-wealthiest person in the United States and the fourth-wealthiest in the world, with a net worth of $81.1 billion.

Those efforts allowed faculty to focus on researching and preparing students for the visit instead of fundraising, said Stephen Fier, Associate Professor of Finance.

“We are fortunate to have a dean and department chair who work tirelessly to ensure that the financial and nonfinancial resources necessary to organize this type of trip are available,” he said.

“A lot of things had to break our way in order to make this trip work,” Box said. “We were thrilled to find out that we had been selected in late August. We only had a month-and-a-half to prepare, but Dean Cyree gave us the support we needed to get us back and forth from Omaha on short notice.”

It was a rare opportunity, and Buffett delivered on the promise of the event, Lynch said.

“Mr. Buffett is energetic and engaging, repeatedly reminding students that being a good person is an important part of being a good investor,” he said.

Lynch, Box and Fier selected the students for the trip through a competitive application process. The students were required to be involved in the Financiers Club or Gamma Iota Sigma, a risk management and insurance business fraternity.

It was a tremendous honor to represent the Business School, said Grant Wiley, a senior from Dallas majoring in Managerial Finance.

“Buffett was funny,” Wiley said. “He was very personable and stressed how important it is to love what you do and to do it with a group of people you enjoy.”

Throughout the semester, students were given reading assignments on Buffet and Berkshire Hathaway for classroom discussions.

“In the final weeks before our trip, these students identified interesting topic areas and drafted a list of questions to ask during our session,” Box said.

The students derived their two questions from weeks of thorough research, including analysis of financial statements, previous interviews, annual reports and various compositions from Buffett.

Students who participated in the event will remember it the rest of their lives, Cyree said.

“Several have commented to me on the impact that the visit had and marvel at Mr. Buffet’s easy command of intricate business details while engaging the students for over two hours,” he said.

Box said the biggest surprise for him was the sentimentality of Buffett’s comments.

“Despite being the world’s most gifted investor, he weaved into the discussion friends, family, marriage and children into nearly every response,” Box said. “He wanted us to know these relationships and experiences have aided his success.”

Jocelyn Cropper, a senior Managerial Finance major, and Hannah Clark, senior Risk Management and Insurance major, said they were inspired that the 87-year-old Buffett takes time to share his wisdom with students.

“Mr. Buffett has an incredible amount of knowledge beyond investing capabilities and he credits this to reading each day,” said Clark, from Jackson. “Mr. Buffett claims that reading has been his talent and hobby, and he enjoys reading the business-related material.”

Ashely Glennon, a senior Managerial Finance major, was surprised to learn that Buffett claims to have had read every book on investments in the public library by the time he was 11.

“We were able to see firsthand how efficient they are when it comes to getting orders out in time, and I was able to appreciate the amount of time and effort it takes to receive an online order from a distribution center” said Glennon, of Austin, Texas.

“It was amazing to see how three completely different companies ran and also to see the similarities between the three since they are all owned by Berkshire Hathaway,” said Cropper, of Houston, Texas.

Other business schools participating in the event were: Gonzaga University; Northwestern University; the universities of Arizona, Minnesota, Nebraska at Lincoln, Nebraska at Omaha, Peru and Tennessee; and the Wharton School at the University of Pennsylvania.