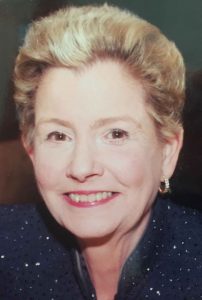 Sally Ellen Walthall Cribbs, passed away after a yearlong battle against cancer at her home in Oxford, Miss, surrounded by her family.  Sally was born Jan. 24, 1947, to Walter Walthall, M.D. and Alice Brady Walthall.

She was preceded in death by her parents and grandparents, Walter Walthall Sr. and Nellie Paschal Walthall, and Joe Brady and Sally Ellen Douglass Brady. Sally grew up in Alamo Heights and graduated from AHHS. She attended TCU for one year and transferred to Trinity University where she graduated in 1968 with a bachelor degree in Education.  Sally taught at Cambridge Elementary and Shelby County Tennessee while her husband was in dental school.

She married Thomas Cribbs in June 1970 and they were married for forty-seven years, supporting him in his dental practice and his beloved Ole Miss Rebels. Sally is survived and well loved by her husband; her son, Thomas Jr. and daughter-in-law, Shelley; grandchildren, Thomas III and Samuel. Also, her brother, Walter Walthall III and sister-in-law, Carolyn; and numerous cousins, nephews, nieces, in-laws and friends.  Sally was a senior member of the Junior League, Battle of the Flowers, the San Antonio Country Club, and was a lifetime member of First Presbyterian Church.

The family would like to thank her many friends for their care and support the past year, especially Carolyn Walthall, Jane Buchek, and Martha Ann Franco. Visitation will be held on Thursday, Nov. 2 from 5 p.m. to 7 p.m. at Porter Loring Mortuary on McCullough.  A Memorial Service will be held on Friday, Nov. 3 at 11 a.m., First Presbyterian Church, 404 N. Alamo, San Antonio, TX.

The family would like to thank so many of you for your prayerful support the past year.  Memorials may be made to First Presbyterian Church or the charity of your choice.