Affection and fear on the Mighty Mississippi 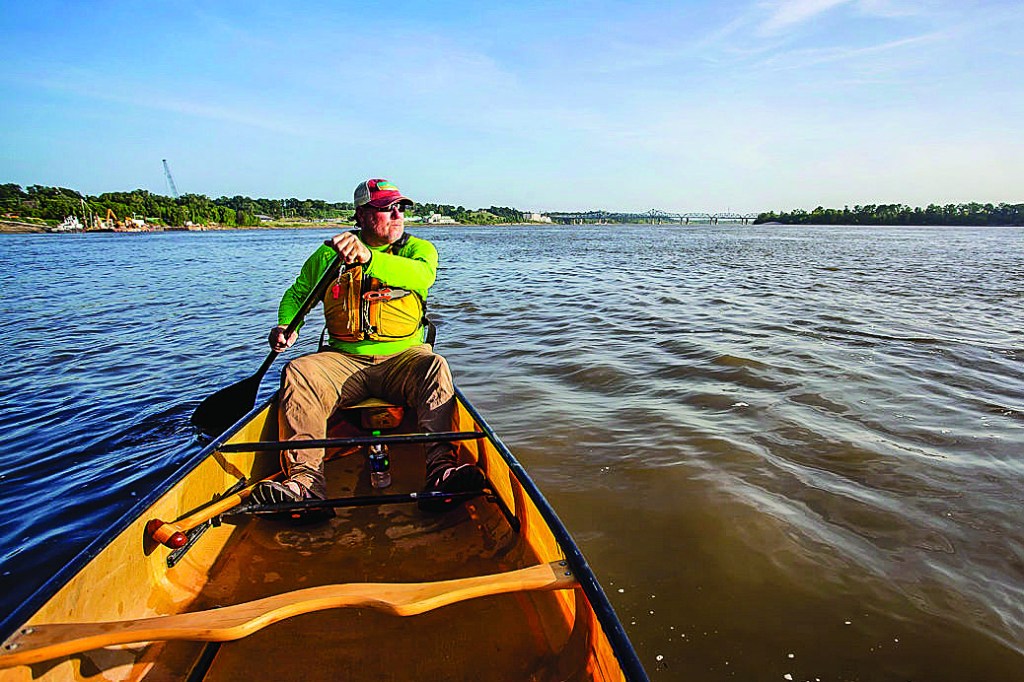 Layne Logue leads a tour of the Mississippi River.

For many who grew up along its muddy banks, the Mississippi River is a thing to be admired, respected and, for some, feared.

It’s a winding body of water known across the globe for its volume and strength, with murky waters that are tranquil yet intensely forceful, touching 10 states. The river not only carved a physical path along the Magnolia State, it also shaped the scope of Mississippi even before statehood 200 years ago.

Native Americans heavily depended on the river for their livelihood and survival, with Indians from the Northwest designating it “missi,” meaning “large,” combined with “sippi,” meaning “flowing water.” As years went on, settlers made their way to the Delta, draining swamps to create useful farmland.

Today, the river remains a recreational playground, a cultural and literary focal point and a commercial highway for the region, the nation and the world.

Natchez native Adam Elliot spent his childhood along the banks of the mighty Mississippi River, and like many, he was told to appreciate the beauty of it, but beware of the danger.

“I always heard, don’t go down there into it. The whirlpools will suck you in, things like that,” Elliott said. “And I stayed away until my late 20s. Then I decided to engage, and I was hooked from there. I got into the sporting aspect and it just kind of grew.”

Around the time Elliot first ventured onto the river, he was restless in his job.

“So one day I left the keys on the desk and kayaked down to the Gulf of Mexico,” he said.

From there, he became an official river guide and manager of the Natchez outpost for the Quapaw Canoe Company.

“It’s not the place people think it is. It’s not what they see from the bridge,” Elliot said. “There’s miles and miles of this wild space that’s rather secluded. It’s incredibly beautiful, and it has so many things to offer us. Our towns wouldn’t be what they are without that river; there’s just so much tied up in it.”

Layne Logue heads the Vicksburg Outpost of the Quapaw Canoe Company and, for him, the trick to managing a trip on the Mississippi River is to take it slow.

“Usually people who have never paddled it are scared of it,” Logue said. “But we’re moving slow. We’re paddling close to shore, because that’s where the wildlife is.”

Logue is associated with River Angels, a group that helps those traveling recreationally down the river by giving them a place to stay the night during bad weather, offering a lift to the grocery store or helping restock supplies. During his years with that organization, he has come across dozens of people who have been drawn to the river from all over the world.

“I love hearing stories from the river paddlers,” he said. “Some people do it before they enter the real world after graduation, some quit six-figure salaried jobs to make a change in their lives and do something fun and some just like adventure.”

Once, he met a man from France who was traveling for two years before he settled into his job as a farmer. As a child, the man watched Tom Sawyer cartoons in France and decided the river was synonymous with adventure.

“Mark Twain’s notoriety and writing skill put the river on the map all over the world,” Logue said.

Over the years, the river has been a compelling backdrop for famed works of art — especially literature.

“Many of Twain’s stories and certainly the characters of Huck Finn and Tom Sawyer exist so deeply in the American consciousness that we cannot separate what we know about the river from what Twain portrayed,” said Jennie Lightweis-Goff, an English literature professor at the University of Mississippi.

In fact, when visiting friends in Kentucky not long ago, Lightweis-Goff realized that everything she knows about the river, she learned from books — Twain, Harriet Beecher Stowe and others.

“I might not be the norm here, since I’m a literature professor, but these novels far exceed the boundaries of the classroom,” she said.

Sondra Wright’s trip on the river was a bit different from Mark Twain’s experience in Life on the Mississippi, but the Columbus, Ohio, resident felt like she saw the past come to life when she was a passenger on the renowned Mississippi Queen paddle wheel-driven steamboat in June.

“This was on our bucket list,” Wright said of her trip on the Mississippi with her husband, Wayne. “It’s more intimate than the big ocean liners, and you get to know more people.”

During the 10-day excursion, Wright and other travelers made stops along the way from New Orleans to St. Louis.

“It’s been wonderful,” said Charlotte Wierd of Michigan, who took the river cruise as a celebration of her 51st wedding anniversary with her husband. “We’ve really enjoyed meeting all the people in the towns along the way.”

As part of their trip, the group made a stop in Vicksburg, where Laura Beth Strickland, the city’s deputy director of the Convention Center and Visitor’s Bureau, said the river is the area’s No. 1 attraction.

“With river cruising rising as a travel trend, Vicksburg is greatly benefiting from the return of the paddle wheelers on the Mississippi River,” Strickland said, noting that last year, the city welcomed more than 20,000 passengers. That number is on track to increase this year.

In 2008, riverboats stopped docking in Vicksburg because of problems caused by Hurricane Katrina, as well as an overall economic downturn that led to Majestic America, the company that had acquired the Delta Queen Steamboat Company, filing bankruptcy. New owners took over in 2011 and, with the return of the boats in 2012, came a boost to the city’s tourism.

“Our local tourism economy has increased 27% over the last 10 years, and I believe the return of the riverboats has contributed to that rising number,” Strickland said.

“From checking out its wonder from the overlooks by our casinos to hiring a river guide or going on a fishing excursion, people want to be part of that Mississippi River experience. We are hoping more opportunities will continue to help our visitors get that experience in Vicksburg.”

The story is similar about 85 miles north in Greenville, where Catherine Gardner, Washington County Convention and Visitors Bureau communications chief, said a number of opportunities are available to people who visit via river cruises — or independently.

“Our river is a big driver in visitors from around the world,” Gardner said. “The ship planners are often looking to book tours with sites along the river as a step-on and step-off tour. What we find is that traveler is interested in local history, food and culture. We have activities that involve the river for people to partake in, such as fishing tournaments, duck hunting and children’s fishing activities.”

Though many feel a strong connection to the entertainment aspect of the Mississippi, others work day in and day out to keep the waterway open as one of the premier commercial highways of the nation.

“Most of our region’s exports are done so by waterways. Most of our local commodities depend on water access,” said Austin Golding, president of Golding Barge Line, headquartered in Vicksburg with barges moving along most every inland navigable channel in the country. “The Lower (Mississippi River) is an unlocked, or dammed, masterpiece — a literal superhighway that links our nation together like no other river.”

Golding Barge employs 230 people and is charged with transporting refined petroleum, chemical and petrochemical products. And the company officials are aware of the importance of what they do and how they do it.

“I think our industry is overlooked and underappreciated but here to stay. As the world gets more crowded, look for the water to pick up the slack and excess,” Golding said. “Safety is our first priority. We have an entire safety department and have several programs that are active at all times. We keep detailed safety stats to track trends and prevent repeat accidents.”

Since the beginning of the 20th century, the U.S. Army Corps of Engineers has fought to manage and maintain the powerful waterway and its surrounding areas to keep it a viable highway for businesses such as Golding Barge though flood control and navigational improvements.

“These efforts allowed the Mississippi River to develop into the vital commercial artery that it is to this day,” said Brian Rentfro, historian for the Corps of Engineers Mississippi River Commission and Mississippi Valley Division. “(And they) provided flood protection for the cities, towns and agricultural lands that lie within the floodplain.”

Though the river has given life to the state, its size and power can also lead to catastrophe.

“The dual role of the Mississippi River as a provider and a destroyer was never more evident than during the 1927 flood, the most devastating natural disaster in the nation’s history,” Rentfro said. “Perhaps nowhere was the river more destructive than in the Mississippi Delta.”

More than 23,000 square miles of land was submerged during the Great Flood of 1927. The river crested at 56.2 feet at Vicksburg, where flood stage is 43 feet. Hundreds of thousands of people were displaced and lived for months in relief camps, and approximately 250 people died.

Congress authorized a Corps of Engineers project of stronger levees and floodways, as well as channel improvements, to make sure a flood like that could never happen again.

Ninety years later, Corps engineers and scientists still battle each day to combat the ever-changing waterway. Because of their efforts, the flood of 2011, when the river crested at a record 57.1 feet at Vicksburg and 61.9 feet at Natchez, did not have the impact it could have.

“A historic flood did not lead to historic levels of destruction, and the reason why was the work that the Corps has done since 1928,” Rentfro said.

While so much is now known about the river, even skillful people like Elliot are still learning and adapting each day they spend on the water.