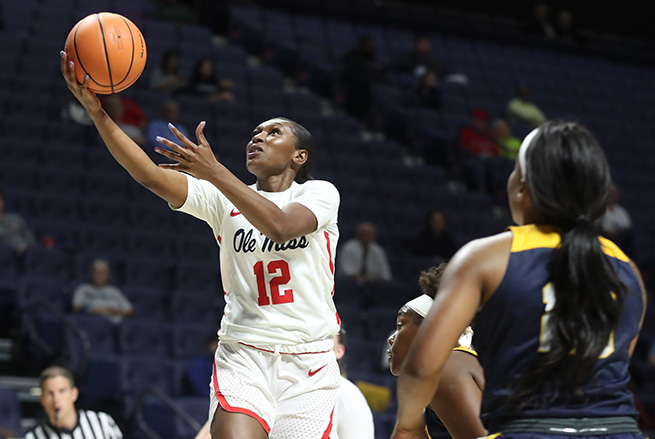 Matt Insell’s fifth season at Ole Miss got underway on Thursday and he got a taste of what his team will look like when the games count.

The Rebels defeated Mississippi College 66-35 in exhibition play at the Pavilion at Ole Miss. They will kick off the regular season on Nov. 10 when they host Northwestern State in a doubleheader with the men’s team.

“It was good to get on the court against someone besides oursevles,” Insell said. “Give credit to Mississippi College. They came in here and played extremely hard. Played a lot harder than we did. That’s something that bothers me. I don’t know where our energy was and our enthusiasm about playing a game wasn’t there. We had a lot of kids playing scared and soft.”

While it was the first game of the season and first competition against someone other than themselves, the Rebels had sloppy play at times. Both teams combined for 62 turnovers with Ole Miss accounting for 25 of them.

“That’s just not having a true leader out there that’s a point guard,” Insell said of the turnovers. “That’s not having any kind of leadership on the basketball court. You got seniors just throwing (the ball) to the other team to start the game. …stuff we don’t do. We’ve got to figure out at that position what’s going on and we’ve got to get better at that position.”

“I thought Promise played timid and scared early but then she got to playing better late,” Insell said. “I think the more minutes she plays the better she’s going to be.”

Water Valley lands players on MAC 2-3A All Division…