Lafayette’s season ends after coming up short to Lake Comorant 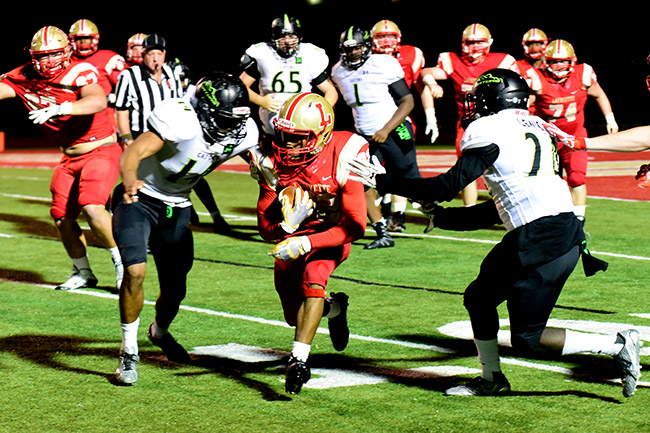 It came down to one play. Down eight points with two seconds left in the game, Lafayette had one final shot at the end zone to score and have a chance at tying the game.

Their season hung also hung in the balance.

Quarterback Randy Anderson dropped back and threw it up to his receiver in the corner of the endzone, but as soon as the ball touched his hands he was sandwiched by two defenders and the pass was broken up.

Lafayette went down by a score 35-27 to Lake Cormorant in an absurd loss that ends the Commodores season short of making their first Class 5A playoff appearance. The reigning Class 4A champions finish 3-8 on the season and 3-4 in Region 1-5A.

Lake Cormorant (5-6, 4-3) earned the fourth and final playoff seed out of 1-5A and will travel to undefeated Cleveland Central (12-0) for a first round matchup on Friday.

It was win or go home for Lafayette, and all but around 100 of the most loyal Lafayette fans went home before the second quarter. The game took over four hours to complete after a lightning delay near the end of the second quarter took over two-and-a-half hours, with the inclement weather scaring off most of the Commodore faithful.

“I think its great that if you’re going to have (a delay), you have it at home because we’re in our field house and comfortable, and I thought our guys handled it well,” head coach Michael Fair said. “I know we gave up a touchdown right after it, but we were pinned deep anyway because of a muffed punt. Had chances at the end to win, and effort wasn’t the issue, it’s just these guys had to overcome a lot of odds and a lot of adversity and we just couldn’t pull it through tonight.”

Before the delay, the score was 7-6 Lake Cormorant. Once play resumed, the game remained close. After Lake Cormorant’s quick score after the delay, Lafayette came back with a Jamarcus Quarles rushing touchdown and a two point conversion from Anderson to Drew Dabney.

Soon after, Lake Cormorant scored on a long touchdown pass, and returned a blocked punt for a touchdown to take a 28-14 lead.

Two Randy Anderson rushing touchdowns brought the Commodores within one point, but a pick six extended the Gators lead to 35-27. With only 55 seconds left in the game, Lafayette put together a nice series to get a shot at a game-tying score, but was unable to finish the drive.

“We had a chance,” Fair said. “Gave up a touchdown on a punt block, gave up a pick six, and even through all that had a chance to win. Several injuries tonight, had some guys playing out of position from what we had been, just been shorthanded all year, but this bunch they battled and they fought hard. Couldn’t be more proud of the effort, that’s for sure.”

Running back Jamarcus Quarles had an excellent showing for his final game in a Commodore uniform, rushing for 99 yards and two scores, including a 71 yard run, racking up 36 receiving yards and playing on defense. Quarles will probably be missed the most out of this team’s senior class.

“They’ve been through so much with us, and last year was special to say the least,” Fair said of the seniors. “They were a big part of that.”

While going out with a win would’ve been preferable, Fair hoped the class could make the loss into something positive.

“I think there’s a lot to learn from it, and I told them after the game, it’s not what we drew up, but there’s opportunities to learn through this and through the adversity, and I hope our guys do that and it makes them into better men,” Fair said.

Meanwhile, plenty of prominent Commodores return next year, including quarterback Randy Anderson, who will be a junior. Anderson finished the game with 177 rushing yards and two touchdowns, and threw for 124 yards and one interception.

“We’re excited about our program, and even in the loss tonight because the guys never quit,” Fair said. “Of course they could have, multiple opportunities all year long to throw in the towel, and the bunch that you saw out here tonight never did, and that’s what this program is built on. It started long before I got here.  Its hard work and it’s a blue-collar attitude. Even though we kind of had the odds stacked against us, we still had that mindset.”