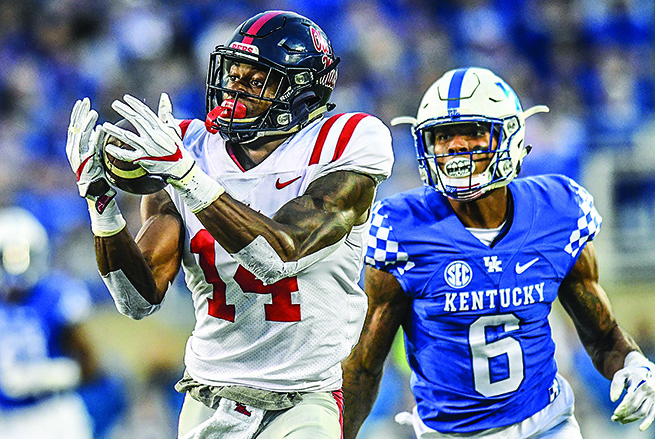 Ole Miss has suffered what interim head coach Matt Luke had called ‘gut punch’ losses over the past few weeks.

On Saturday, the Rebels finally survived a gut check to defeat Kentucky 37-34 at Kroger Field in Lexington.

It was the first time Ole Miss (4-5, 2-4 Southeastern Conference) has played the Wildcats since 2011 and have won two of the past three games in the series, dating back to 2010.

With five seconds remaining Ole Miss receiver D.K. Metcalf hauled in a pass from Jordan Ta’amu in the back left corner of the end zone to give the Rebels their fourth — and final — lead of the game.

It was Metcalf’s second touchdown of the half after going 58 yards late in the third quarter to tie the game up 27-27.  He finished with 83 yards and two touchdowns on five catches.

The game was a see-saw affair with seven lead changes combined by both teams. The second half became a shootout with Ole Miss and Kentucky (6-3, 3-3) combining for 34 points.

In his second game as the starter, Ta’amu had his best performance as a Rebel, picking up his first career win. He went 31-of-40 for 382 yards, four touchdowns and no interceptions. Ta’amu also rushed for eight yards on 10 carries.

Special teams played a factor in keeping the Rebels in the game with Gary Wunderlich going three-for-three in field goals with his longest being 49 yards in length to put the Rebels up 30-27 early in the fourth quarter.

The running game was not firing completely with an injured Jordan Wilkins rushing for 44 yards on eight carries. D’Vaughn Pennamon rushed for 42 yards on seven carries.