Turnovers dash Oxford’s postseason hopes in loss to No. 3 Tupelo 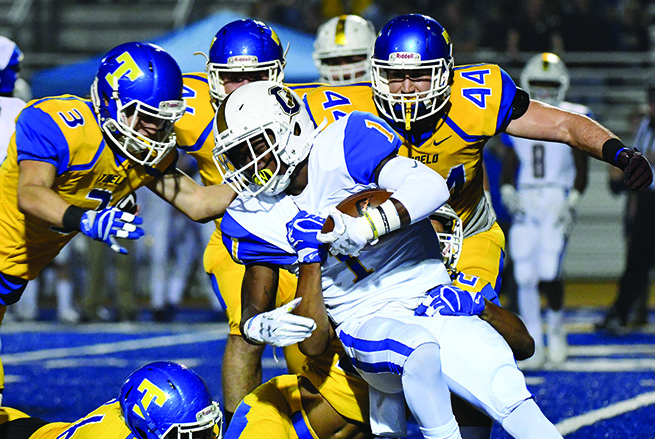 That was what the season had boiled down to for Oxford. A win against undefeated No. 3 Tupelo would put the Chargers back in the playoffs for the sixth straight season and the No. 2 Seed in 1-6A. A loss would end their first year in Class 6A prematurely.

It was the latter which occurred as Tupelo used six Charger turnovers to get the 34-8 win at Tupelo High School on Friday night. While most games were delayed for hours or even postponed completely, Oxford and the Golden Wave were able to finish their regular season finale before the weather arrived.

“Way too many turnovers,” Oxford head Chris Cutcliffe said. “Obviously, Tupelo is a great football team. You turn it over like we did and we had some costly penalties, you’re not going to beat a team like Tupelo with those kinds of mistakes.”

The sense of urgency for Oxford was noticeable from the start. In the Chargers first possession, quarterback John Reece McClure attempted three straight deep passes but unable to find a receiver. The passing game failed the Chargers most of the first half as McClure threw four interceptions in the first two quarters.

His final interception resulted in a pick-six by Tupelo linebacker Clay Cox who took it 27-yards for the touchdown late in the first half to make it 24-0 at intermission.

The first half drives for Oxford ended in three punts and four interceptions. The Chargers finished 80 total yards in the first two quarters while Tupelo eclipsed them with 189.

“We felt like we’d be able to come out and throw the football on them,” Cutcliffe said. “We did at times but obviously the turnovers are what got us in the end. They kind of came back to bite us.”

The Golden Wave’s other touchdowns came from running back Jaquerrious Williams who scored two touchdowns in the first half and another late in the fourth quarter. Kicker Josh Smith also connected on two field goals of 38 and 34 yards in length, respectively.

John Mark Meagher replaced McClure in the second half and managed to get the offense rolling. J.J. Pegues came in and with some trickeration up Oxford’s sleeve connected with defensive lineman Lamarcus Falkner on a 22-yard pass for the Chargers’ only touchdown of the night. Pegues then converted a two-point try to make it 24-8 midway through the third quarter.

Meagher finished 13-of-19 for 142 yards through the air. He also ran for 19 yards on eight carries. McClure finished four-of-13 for 34 yards and four interceptions.

In his final game as a Charger, running back Hiram Wadlington ran for 32 yards on nine carries.

Lafayette’s season ends after coming up short to Lake…