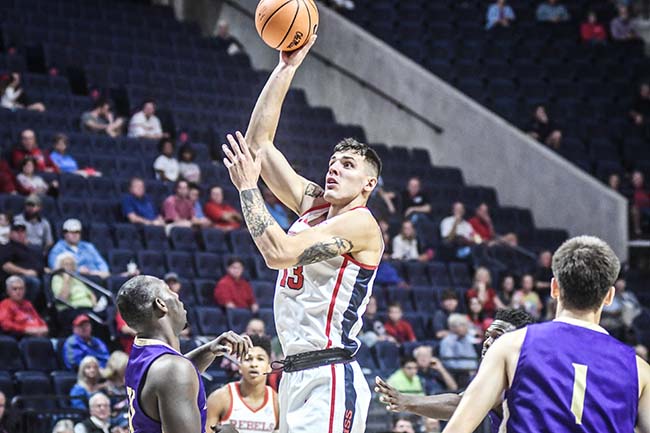 Ole Miss’ Dominik Oleniczak (13) shoots against North Alabama in an exhibition game at the Pavilion at Ole Miss, in Oxford, Miss. on Sunday, November 5, 2016. (Bruce Newman, Oxford Eagle via AP)

Devontae Shuler started in his first games as a Rebel and quickly proved why.

The freshman out of Irmo, South Carolina scored a game-high 18 points in Ole Miss’ 94-53 win over North Alabama in exhibition play at the Pavilion at Ole Miss on Sunday afternoon.

It was the first time head coach Andy Kennedy — entering his 12th season at Ole Miss — got to unveil his new roster to the public. They’re performance was promising to the Rebels’ NCAA Tournament prospects come March.

“Got a lot of guys minutes. Pleased with it. Mission accomplished,” Kennedy said after the game.

Shuler finished with three rebounds and two assists in 23 minutes of play.

Keeping his play-calling ‘vanilla’ heading into Friday’s season opener against Louisiana (7 p.m.) Kennedy played nearly everyone off the bench. 10 players had double-digit minutes with Shuler staying on the court the longest. He finished with three rebounds, two assists and two steals.

“He’s as talented as we’ve ever signed here, guard wise,” Kennedy said of Shuler. “He can do it all. Guard you. Dribble, pass, shoot. He’s got great instincts. …once he learns the place he’s going to be something. He’s going to really help us.”

Of the newcomers to the team, center Dominik Olejniczak finished with eight points, four rebounds and two blocks.

Of the hustle numbers Ole Miss out-rebounded North Alabama 54-45 and had a 10-8 edge in steals.

The word athleticism has been used to describe the Rebels and they showed their speed with 18 fast break points. North Alabama did not record any points in transition. The Rebels also out-scored the Lions 52-32 on the bench.

The only negative was the 19 turnovers committed by the Rebels, but Kennedy accounted those to the lopsided score and rotating so many players throughout the game.