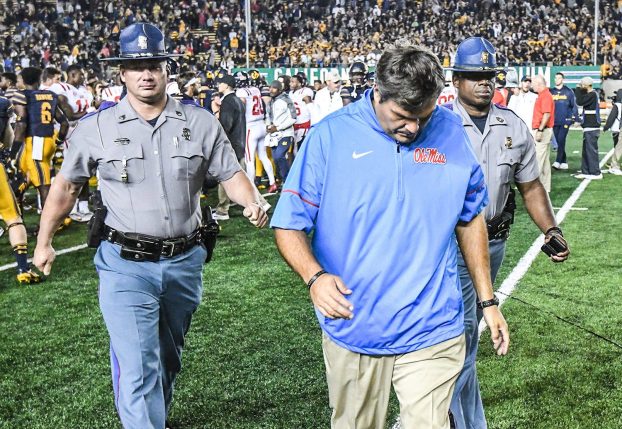 They stand on the sideline at Vaught-Hemingway Stadium in their uniforms, waiting to walk onto the field. Once there, they could block or even make a tackle if they need to.

But Anthony Granderson and Philip Mitchell would rather not because they’re not football players. They’re members of the Mississippi Highway Patrol that make up Ole Miss coach Matt Luke’s security detail.

They’re the officers usually spotted by television cameras guarding Luke during halftime and postgame interviews, but that’s just scratching the surface of what the duo’s responsibilities entail. Granderson and Mitchell have a weekend-long routine they’ve maintained for years in the fall with an overriding objective — do everything in their power to ensure the safety of the Rebels’ interim coach and his family.

“That’s our whole thing is to get them where we’re going and get them home safely,” Mitchell said.

Granderson’s job as a training officer keeps him at the MHP’s training academy in Jackson four days a week while Mitchell is assigned to Pontotoc as a staff sergeant, but the two work with Ole Miss assistant athletic director of football operations John Miller to formulate an itinerary throughout the week. What that looks like varies from weekend to weekend depending on where the Rebels are playing.

For home games, Granderson and Mitchell meet the team outside its indoor practice facility late Friday afternoon to escort the team buses to Tupelo, where the Rebels stay the night before the game. With Granderson leading the convoy in the front and Mitchell following in the back, the team makes the 50-minute trip to a hotel where team meetings are held and dinner is served before players and coaches call it a night.

Granderson and Mitchell hover outside the meeting rooms and in the parking lot while also monitoring hallways until hotel security shows up around 11 p.m., making sure fans don’t interfere with any part of the Rebels’ preparation.

“Fans will go around knocking on players’ doors at night and coaches’ doors,” Granderson said. “We kind of cure a lot of that being there and being seen. That’s a deterrent just for someone to see us there.”

The two lead the team back to Oxford on Saturday in time for the Walk of Champions through the Grove two hours before kickoff. While officers with the university’s police department walk with Luke through the Grove, Granderson and Mitchell use that time to park their patrol cars and help unload bags and other luggage from the buses before meeting Luke and the team in the locker room.

If the Rebels are traveling to another state to play like they did this weekend at Kentucky, Granderson and Mitchell handle the logistics of the trip, which includes working with two troopers from that state who are assigned as part of the security detail since Granderson and Mitchell don’t have any law enforcement authority outside of Mississippi. As the head of Luke’s regular detail, Granderson said he acts as a “middleman,” providing the other state’s troopers with a copy of that weekend’s itinerary so they can help escort the Rebels to and from the airport and to and from the stadium.

Granderson or Mitchell are with the team every weekend as long as they can be. If not — Granderson didn’t make the trip to Kentucky because he was needed at the training academy — arrangements will be made for another trooper to fill in.

Regardless where the game’s being played, their job is the same while it’s going on. Both stand in the players’ box on the sideline with Granderson usually hovering around midfield but keeping a close eye on Luke so he can move if he needs to. Mitchell isn’t far away — usually around the 35-yard line — helping check credentials to make sure there’s nobody in the box that shouldn’t be.

“The moment you let your guard down, something will happen,” Granderson said. “It’s the moment you say, ‘Oh, nothing’s going to happen in front of all these people.’ But we’ve watched enough football to know every now and then, you’ll have a fool run out of the bleachers and onto the field.”

But for Granderson and Mitchell, the job has been pretty tame.

Granderson’s time working on the detail has spanned three coaches in Luke, Hugh Freeze and Houston Nutt after taking it over full-time in 2010. Mitchell joined the detail in 2013 at Granderson’s request, and neither has had to use any extra force to keep their coaches out of harm’s way during or after games.

Once Luke finishes shaking hands with the opposing coach at midfield, Granderson and Mitchell escort him back to the locker room, passing fans along the way that can be more unruly than usual depending on the outcome. Granderson has heard his fair share of vitriolic words spewed at coaches, their wives and even their children over the years, which he said “bothers me because you’re doing it in a cowardly way because you’re up in the stands,” but he said he’s never encountered a fan coming onto the field to pose a threat.

“I don’t have any crazy stories or some outlandish story for you,” Granderson added, “and I hope it stays that way.”

Fans did pour out onto the Vaught-Hemingway Stadium turf in October 2014, but that was to celebrate Ole Miss’ upset of then-No. 3 ranked Alabama that snapped the Rebels’ 10-game losing streak in the series. Mitchell said it’s the craziest postgame scene he can recall in his time on the detail, one that made it a little more difficult than usual to get Freeze, whose five-year tenure ended with his resignation in July, where he needed to be afterward.

“We were trying to make our way to the tunnel to do our TV interview,” Mitchell said. “I know everybody was excited. Those were fans on the field, so nobody was really trying to beat us up or nothing.”

Nowadays, their detail duties end with ensuring Luke gets home safely after the game by following him or giving him a ride. For Granderson and Mitchell, the weekends in the fall have become more than a job.

Their ties to the sport and the school make it naturally enjoyable — the 49-year-old Granderson was a linebacker during his college days at Alcorn State and is married to former Ole Miss women’s basketball standout Peggie Gillom-Granderson while Mitchell, 40, is a lifelong Ole Miss fan who’s still friends with former Ole Miss All-American and fellow Pontotoc native Wesley Walls — but Granderson and Mitchell get an up-close look at the gamut of emotions that come with a college football season for Luke and his family. Being there alongside them for the thrill of victory and agony of defeat over the course of 12 weeks makes for a bond that brings a human element to a serious job.

Safety will always be the priority. It’s largely a selfless act, but it’s one Granderson and Mitchell are more than happy to be providing.

By Haley Myatt EAGLE Contributor A group of University of Mississippi students got career advice and wisdom from Warren Buffett,... read more