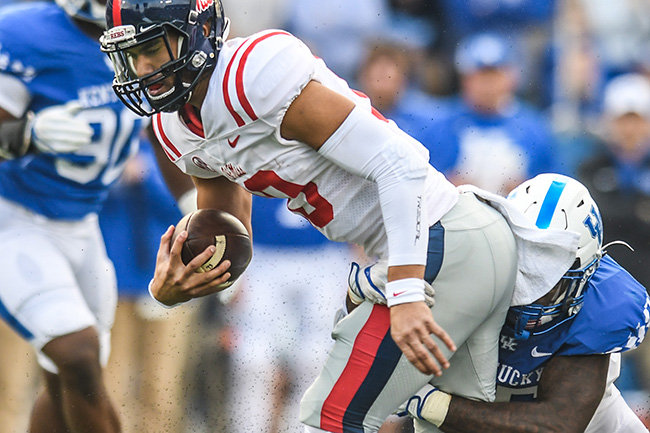 Three Ole Miss players were recognized by the Southeastern Conference for their performances over the weekend against Kentucky.

Quarterback Jordan Ta’amu was named SEC Offensive Player of the Week, receiver DK Metcalf was named co-Freshman of the Week, and defensive tackle Josiah Coatney was named Defensive Lineman of the Week after helping the Rebels rally for a 37-34 win Saturday in Lexington, Kentucky.

Ta’amu went 31 of 40 for a career-high 382 yards through the air in just his second start of the season in place of the injured Shea Patterson, setting a single-game school record for completion percentage with a minimum of 40 attempts (77.5). Ta’amu is the first Ole Miss quarterback to ever total at least 750 yards in back-to-back SEC games.

Metcalf had five catches for a game-high 83 yards with two touchdowns, tying a career-high. The redshirt freshman caught the game-winning score with 5 seconds left. His first touchdown grab was a 58-yarder.

Coatney had a career-high two sacks and 2.5 tackles for loss in the win. The sophomore finished with five tackles with four of them being solo.